Today is the Feast Day of Agios Georgios, a great and glorious Martyr of Christ

Pagenews.gr / English Edition / Today is the Feast Day of Agios Georgios, a great and glorious Martyr of Christ

If April 23 falls on or before Great and Holy Pascha, the Feast of Agios Georgios is commemorated on Easter Monday.

Today is the Feast Day of Agios Georgios, a great and glorious Martyr of Christ, born of a father from Cappadocia and a mother from Palestine. Being a military tribune, or chiliarch (that is, a commander of a thousand troops), he was illustrious in battle and highly honoured for his courage.

When he learned that the Emperor Diocletian was preparing a persecution of the Christians, Saint George presented himself publicly before the Emperor and denounced him. When threats and promises could not move him from his steadfast confession, he was put to unheard-of tortures, which he endured with great bravery, overcoming them by his faith and love towards Christ. By the wondrous signs that took place in his contest, he guided many to the knowledge of the truth, including Queen Alexandra, wife of Diocletian, and was finally beheaded in 296 in Nicomedia.

His sacred remains were taken by his servant from Nicomedia to Palestine, to a town called Lydda, the homeland of his mother, and then were finally transferred to the church which was raised up in his name. (The translation of the Saint’s holy relics to the church in Lydda is commemorated on November 3; Saint Alexandra the Queen, on April 21.)

If April 23 falls on or before Great and Holy Pascha, the Feast of Agios Georgios is commemorated on Easter Monday 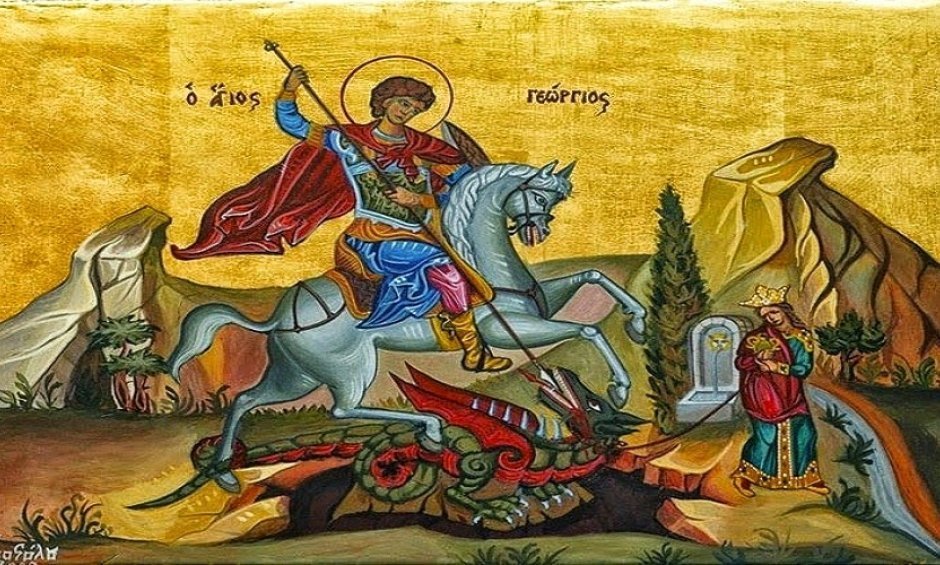 Agios Georgios survived several attempts to kill him. The first torture was him being placed on a wheel and as the wheel turned, St. George was pierced all over his body, but an angel came and healed him. They put him in a pit and covered him with lime and three days later they dug him out and he was unharmed. They put him in iron shoes with hot nails. Then they whipped him brutally. They poisoned him. After all of this, Diocletian asked by what power he was able to survive all this and he said that Christ had saved him. Diocletian asked about what kind of stuff Christ had done and St. George mentioned all the miracles, including Christ’s resurrections. Intrigued by the idea of resurrection, they took St. George to a cemetery and through a prayer, a body came out of the grave. Eventually St. George was taken to the pagan temple, where he called out the demons that inhabited the idols, which claimed they were not gods. Ultimately he was beheaded on April 23, 303 AD.

In the history of our Church, we find a myth related to a dragon and Saint George. This dragon threatened the idolaters in the area of Atalia. The people were forced to live inside the walls of their city. This prevented them from tending their fields and grazing their sheep. Every year, they would sacrifice a young girl to the dragon. When Saint George arrived in this area, the King’s daughter was about to be sacrificed. After subduing the dragon, Saint George placed a rope around its neck. He then gave the rope to the princess so that she could lead the beast back to the city. Thence, he slaughtered the terror and subsequently baptized thousands of the city’s inhabitants.

It is from the icon of Agios Georgios that this myth came about. The icon depicts the Saint as an equestrian slaying the dragon with the princess in the background. The first iconographers of Saint George were probably trying to depict Satan as the dragon and Saint George conquering evil. Another explanation of this icon is that the artists were trying to depict Diocletian as the dragon and Saint George conquering him. The princess in the background could have been Empress Alexandra who watched Saint George as he triumphed. She could also symbolize Christianity, or the Church itself. When the Crusaders journeyed through the Byzantine Empire, they saw this icon and from its depiction, they interpreted the legend which they spread throughout western Europe.