The Lesvos bull: An Agios Haralambos Church tradition with the Buphonia

The Lesvos bull: Few know that a village in the Aegean island of Lesvos island holds a festival from July 11 to 13 where a bull sacrifice takes place.

Few know that a village in the Aegean island of Lesvos island holds a festival from July 11 to 13 where a bull sacrifice takes place. Although the sacrifice is attached to a tradition of the Agios Haralambos Church, it actually holds its roots with the Buphonia (Greek: Βουφόνια “ox-slayings”), a sacrificial ceremony performed in Ancient Greece as part of the Dipolieia, a religious festival held on the 14th of the midsummer month Skirophorion— in June or July.

The bull sacrifice is an original folk custom deeply associated with the habitants’ of Lesvos island life, as they are looking forward to celebrating it each summer. The feast begins during the evening of the first day when people adorn the bull with flowers and pass it round until they arrive at the central square of Pigi village in Lesvos, where they start a big revel. 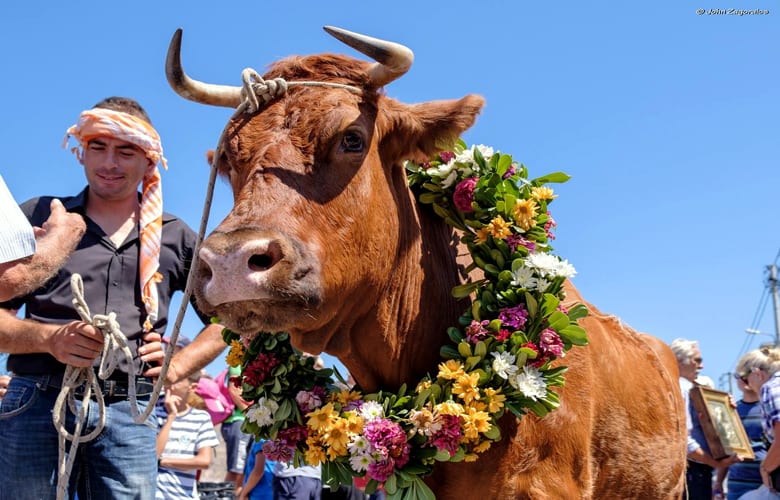 What follows on the next morning, is a parade and a horse beauty contest. Then, people of Lesvos island walk towards Tsamliki, a pine forest on Tavros mountain. Both horses and their riders are climbing a cobblestone pavement in order to reach Agios Haralambos church and are blessed by the priest.

Another revel takes place in the middle of the forest afterwards, and the drama prominence comes at midnight when the bull is sacrificed. While some people keep on reveling all night long, there are a few who stay awake to cook the bull. They boil it in cauldrons all night long and then add wheat. The priest arrives at 9 in the morning in order to bless the food, called “kiskets” or “kisketsi” , which is then served to the people.

The next activity of that feast consists of horse races on a tableland closely to Tavros mountain and the last one, on Sunday evening, includes the final revel in the central square of Pigi village. The bull costs almost €3,000 and is bought a few days in advance. Music plays while the animal is being adorned.

In the past, only virgins were allowed to adorn the bull and men had to cross their legs. During a procession which heads from west to east of Pigi village of Lesvos island, women who follow it, offer the bull pieces from their daughters’ trousseau, because it is believed that this will help their daughters get married to a fertile husband.

Both young and old men touch its horns as it is believed to give them some of the bull’s vehemence. Farmers offer the bull oil in order to ensure a rich harvest. The bull is headed to Agios Haralambos church where the priest blesses it, on the evening of the second day. The inhabitants of Lesvos island arrive there too, through a route full of pines and olive groves, while musicians accompany them.

After the bull is sacrificed, people draw a cross on their forehead with its hot blood and they also cross their cows in order to help them be pregnant. The bull weighs almost 400 kg and should be a healthy animal. In the past, the choice of the bull depended on its genre, colour and age and it had to be immaculate. 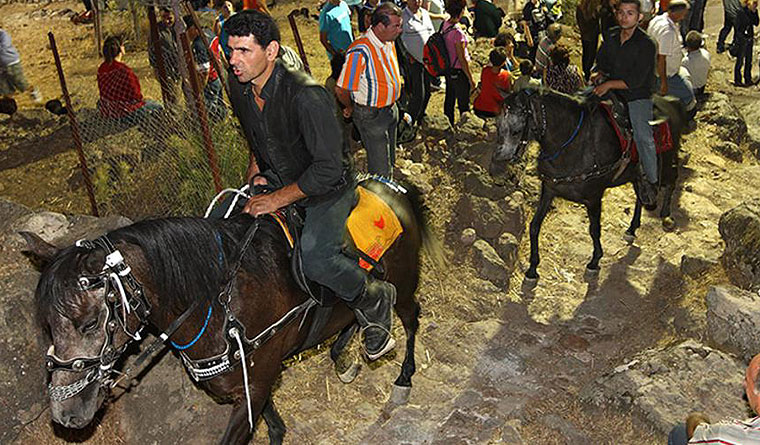 During the second day of the feast, the horses are decorated in the prettiest way and children ride them while their parents hold the reins. Sometimes, a mare shows up before the horses’ beauty contest, causing an agitation among them!

When the sound of that specific mournful and at the same time doughty rhythm, known as “Ati Havasi”, is heard, the “horses’ dance” starts. The winner is the horse with the best decoration, the best shaping and the one which seems to have the best “relationship” with its rider. It means that the horse is well “educated” and obeys his rider.

The Athenians of the age of Aristophanes regarded the sombre ritual of Buphonia as archaic; its founding myth attributed its inception to Cecrops, the chthonic king of remotest legend (Aristophanes), to Diomus (Theophrastus, cited by Porphyry in De Abstinentia 2.10.2) or to archaic Erechtheus (Pausanias 1.28.10). The Dipolieia survived at least to the time of the Roman Empire.

The offering of grain was a reminder of the time “when people shrank from eating oxen,” as Plato related in The Laws (782c), “and offered no animals in sacrifice, but rather, cakes and the fruits of the earth soaked in honey, and other such pure sacrifices.”

The description by Porphyry describes the founding of the ritual killing. A farmer from Attica by the name of Diomus was in Athens celebrating a common sacrifice. A working ox approached the table where the cakes and offerings had been laid out.

When the ox had ate some and trampled upon the rest, Diomus killed the ox with an axe and proceeded to bury it. Perceiving the act to be an impious one, Diomus is said to have fled to Crete. Meanwhile the Attic land was struck by drought and sterility of fruit. 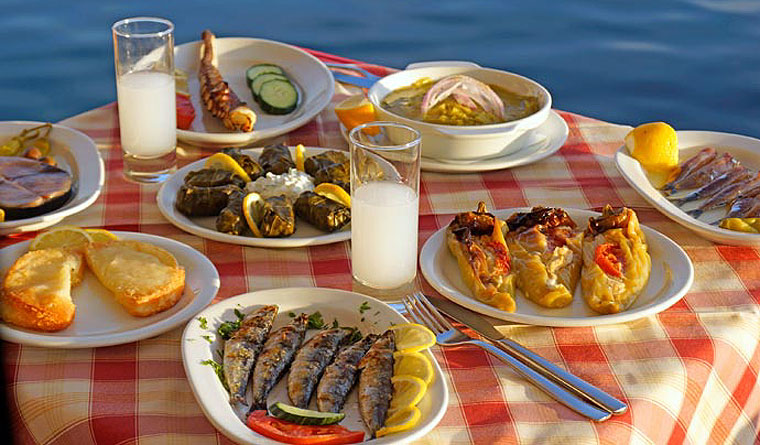 When the people consulted the Pythian deity, the God said the murderer must be punished and a statue of the ox erected in the place. Diomus, seeking to be freed from the crime, determined that an ox should be slain by the city so that all the men would have the act in common. The people therefore take part in the slaughter with Diomus being the one to strike the ox.

Porphyry describes the deed as follows. Virgins are to act as drawers of water. Three separate persons are respectively responsible for giving the axaax, striking the ox, and cutting the throat of the ox.

All who are present then eat of the ox. The ox hide is then stuffed with straw and yoked to a plow. The judicial process then proceeds in a ritual manner. The drawers of water accuse the knife sharpeners who then accuse the one who handed over the ax. That person then accuses the one who cut the throat, who in turn accuses the knife. In such a way the knife is found to be guilty and is cast into the sea.

These events are repeated each year on the Acropolis at Athens. Cakes are placed on a brazen table and oxen are driven to the area. The one that eats of the cakes is chosen for the ritual killing. Various names are designated based on the roles played. Those whose origins come from Diomus are designated as boutupoi (slayers of oxen). 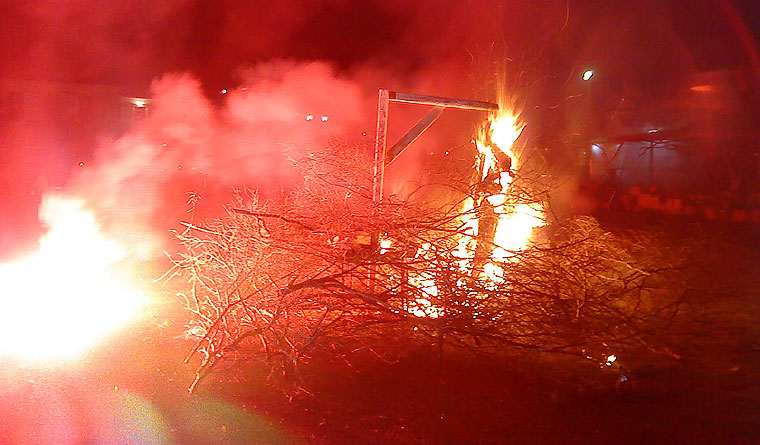 Those who are responsible for the driving of the oxen are designated kentriadai (stimulators). Finally those who cut the ox’s throat are designated daitroi (dividers) following the distribution of the resulting meat.

The church has not always been comfortable with this idea and in the late 18th century, a monk named Nicodemus denounced the sacrifice as a “barbaric custom” and “vestige of ancient pagan error”, without success, as he was himself accused of heresy by the village priests. The custom survives today in some parts of Greece and in three places in Lesvos (Pigi, Agia Paraskevi and Pelopi)