Believed to be the remaining link to the Lost City of Atlantis, in Greek mythology Santorini was created when Euphemus, son of Poseidon, threw a clod of earth into the ocean after he dreamt that he made love to a nymph.

In his dream, the nymph became with child and fearing the wrath of her Father Triton, she instructed to Euphemus to retrieve the clod of earth from Anafi Island and throw it into the sea so that she made hide and give birth. Euphemus did as the nymph asked, and the island of Santorini appeared. 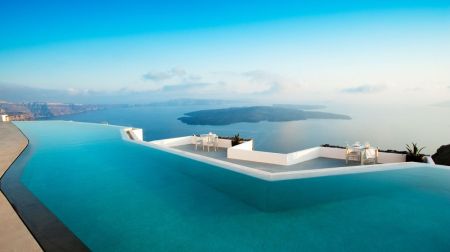 A Cliff-Top Retreat in Santorini

Perched high above the Aegean Sea in this magical place, privy to the island’s most emblematic views, is it any wonder that the picturesque sanctuary that is the Grace Hotel, Auberge Resorts Collection in Santorini, has come out on top of a poll of travel magazine readers as the Best Hotel in Greece and ranked as the second Best Hotel in the World?

Every year, the readers of travel magazine Travel + Leisure vote in a survey and rate hotels based on their facilities, location, service, food and overall value and the result culminates in the Travel + Leisure World’s Best Awards, providing a ranked list of the world’s most on-trend hotels.

From enjoying the first breath-taking sunset from the Hotel’s infinity pool, the largest on the island, overlooking the island’s emblematic Caldera, guests will understand just how easy it is to become entangled in the spell of Santorini.The luxurious rooms, suites and villas of the resort range from 50 up to 400 square metres and embrace Santorini’s sensual sophistication and seaside splendour, blurring the lines between indoor and outdoor with clean lines and natural materials. All accommodation features expansive indoor-outdoor spaces featuring heated plunge pools opening to sweeping views of Santorini’s emblematic caldera.

Inspired by the ancient healing traditions of the Mediterranean

The hotel’s wellness guru came to Grace Hotel inspired by the volcanic island’s natural surrounds and rich ancient history, “a land where centuries of civilisations have flourished in the languid waters of the Aegean Sea and the black- and red-sand beaches that dot its stunning coastline.”

As a result, the Resort’s holistic spa treatments – performed in the comfort of your own room – combine the power of healing traditions with modern-day techniques.

The hotel also offers a fitness studio, as well as a private yoga and pilates facility.