The Acropolis Museum and the National Archaeological Museum as well as the Museum of Byzantine Culture in Thessaloniki are only some of the Greek museums celebrating the August full moon on Friday, August 12, 2022 with special events with entrance free of charge.

105 archaeological sites, museums, historical monuments will open their gates to public on Friday evening so people can watch the spectacle of the August full moon in a majestic surrounding. 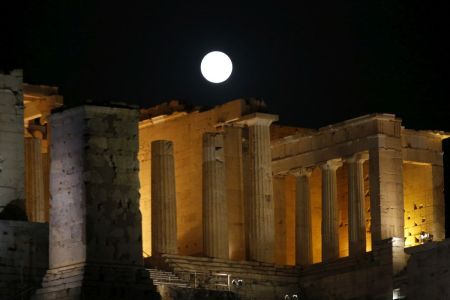 The major events in Athens and Thessaloniki are:

– Acropolis Museum courtyard, 21:00, the Hellenic Air Force bank will perform Greek and foreign songs about the moon. The band members, which includes musicians with professional music studies, will accompany two singers. Entrance to the museum is free on Friday as of 21:00, and the restaurant will operate the same times, staying open until midnight. The event is free. (Restaurant reservations at 210 9000915)

The Greek Culture Ministry released beginning of the week the schedule of cultural activities and events for August 12 and some other dates.

The falcon that scared Giannis Antetokounmpo

Maria Sharapova is in Greece

Greek Tour. Min.: Greece is a cultural and sustainable destination

The goal is a tourism product that will combine cultural routes with green development, said the Minister of Tourism Vassilis Kikilias

Physical education teachers give advice and best practices for individual programs of aerobic exercise, muscle strengthening, blessing exercise and recovery. The activity will take place taking all the necessary measures for safe training.

The 2022 Greek Film Festival program follows opening night with 13 narrative features, 3 documentaries and the Student Film Festival in a diverse offering of the best that Greek cinema has to offer.

Three new metro stations in Piraeus will open on Monday

The total travel time by metro from the port to the airport is estimated to only be 55 minutes. It is expected to reduce car traffic by 23,000 vehicles per day, as well as reduce carbon dioxide emissions by 120 tons per day.

George Papoutsis, as can be seen in the videos he has posted on Instagram, scores from everywhere and as he wants. What's even more impressive is that he does all the magic in basketball while wearing hiking boots.

“At this early stage… each university, on its own, does not have the resources for promotion,” said Associate Professor Christos Michalakelis, head of the Study in Greece (SiG) initiative.

Samothrace: The most magical natural pools in Greece

These include a photography exhibition on “Pasolini and Greece,” opening on October 6 and running to November 25, and screenings of his films on October 6, 13 and 26 and November 9 and 15.

Greek Tour. Min.: Greece is a cultural and sustainable destination

The goal is a tourism product that will combine cultural routes with green development, said the Minister of Tourism Vassilis Kikilias