He is the youngest player ranked in the top 10 by the Association of Tennis Professionals and currently has a ranking of No. 4th in the world

Greece’s young tennis sensation Stefanos Tsitsipas was born on the 12th of August 1998. Stefanos Tsitsipas is a Greek professional tennis player. He is the youngest player ranked in the top 10 by the Association of Tennis Professionals and currently has a ranking of No. 4th in the world . His highest ranking was 3rd making him the highest-ranked Greek player in history.

Born into a tennis family where his mother was a professional on the Women’s Tennis Association (WTA) tour and his father was trained as a tennis coach, Tsitsipas was introduced to the sport at the age of three and began taking lessons at the age of six, at the Glyfada Tennis Club in Athens. 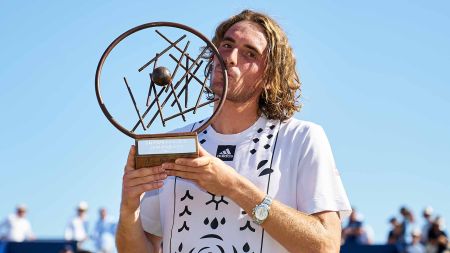 “I became involved because of my parents who happen to be tennis coaches, so tennis was part of my life from the very beginning. I had a good coach who taught me the basics and developed my game and mentality for the sport,” he previously told Greek City Times, in an exclusive interview.

He credits his father Apostolos, as being his mentor as he is always by his side, helping him achieve his goals.

In 2015, Tsitsipas also began training at the Patrick Mouratoglou Academy, splitting time between France and Greece during this period.

Here, you will find locals sipping on coffee all day long, including mornings, lunchtime and evenings!

Bilzerian is no stranger to the Cycladic Island, having traveled there several times, most recently in 2020, which also included a side trip to Santorini.

Stefanos Tsitsipas on Roger Federer: "He was winning Grand Slams before there were iPhones"

The Greek tennis player in his public farewell to Roger Federer used his peculiar style, which has caused strong reactions at times.

More and more European cafes are adding the Freddo Cappuccino to their menus, while the social media accounts that recommend it and show how to make it are constantly increasing

Giannis Antetokounmpo is No.1 on ESPN's list for the 2022-23 season

Kostas Manolas introduced to Sharjah FC as a Greek warrior

In west, central and northern Greece weather will be cloudy with localized rain