Fragogiannis, who is following up on visit to the country by Prime Minister Kyriakos Mitsotakis in October 2021, said that bilateral relations have improved in the last 2.5 years, and that significant work has resulted.

Speaking at the Greek-Saudi Investment Forum in Riyadh, where he is accompanied by delegations of ministers and businesspeople, Fragogiannis also underlined the two countries’ joint commitment to stability and peace in the area.

“It is self-evident that both countries are always committed to international law, including the UN  Convention on the Law of the Sea (UNCLOS), and that both continuously condemn every terrorist act,” the Greek minister said.

Fragogiannis, who is following up on visit to the country by Prime Minister Kyriakos Mitsotakis in October 2021, said that bilateral relations have improved in the last 2.5 years, and that significant work has resulted.

This accordinf to amna, includes the memorandum of cooparation between the state exports agency Enterprise Greece and the Saudi National Companies Promotion Program, which was signed in September in Athens, and the founding of the investment council between the two countries. “What we are preparing now is the completion of the bilateral agreement promoting investments,” he said.

The deputy minister said the ties of friendship and collaboration are not limited to politics, and mentioned an earlier visit where he was warmly received by Crown Prince Mohammed bin Salman bin Abdulaziz al Saud, who also thanked Greece for the Patriot missiles. Addressing Saudi Investment Minister Khalid bin Abdulaziz Al-Falih, he reiterated that during that meeting both sides had identified the sectors “which require our attention and where more work needs to be carried out.”

The ties of friendship and collaboration are not limited to politics

Sectors of interest for collaboration that he mentioned include renewable energy sources, logistics, maritime transport, tourism, culture, construction, agriculture, and shipping. “With us we have dozens of Greek businessmen, very successful ones, who are seeking further opportunities to expand collaboration,” Fragogiannis said, adding that “in the next two days they will meet with Saudi colleagues who share their vision.”

Fragogiannis spoke of Saturday’s visit by the government and business delegation to the antiquities site of Al Ula, which was fascinating and well organized. Addressing the Saudi investment minister, he noted that “your ambition to turn these treasures into an international tourism destination in the framework of ‘Vision 2030’ will come to fruition soon.”

Commenting on the situation in Ukraine during the last two weeks, Fragogiannis underlined that “during turbulent times it is even more imperative to keep our economies vibrant.” 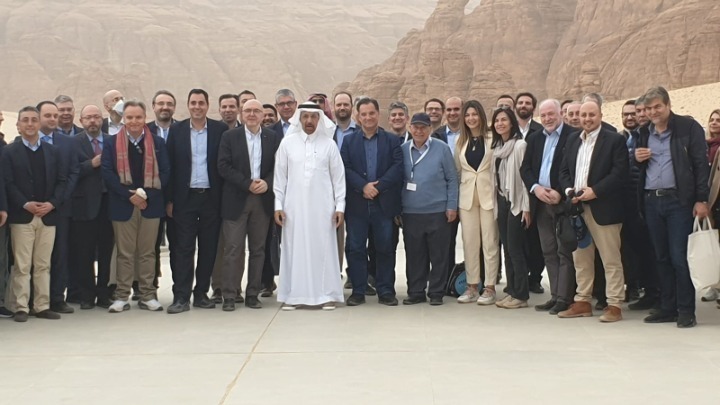 Saudi investments minister: There is indeed a lot of ground to grow

Greece and Saudi Arabia will celebrate a century of diplomatic relations in a few years, as Greece was one of the first countries to recognize the modern state of Saudi Arabia, the latter’s Investment Minister Khalid bin Abdulaziz Al-Falih said on Sunday.

Addressing the Greek-Saudi Investment Forum and delegations of Greek ministers and businessmen, the Saudi minister referred to his visit to Greece in September 2021 and termed the joint business forum a landmark in bilateral relations and investments, along with the agreement on maritime trade.

Providing specific proposals to increase investments at both countries

On bilateral trade in general, Minister Khalid bin Abdulaziz Al-Falih said that it is below expectations and opportunities. At present, 14 Greek companies in several sectors are active in Saudi Arabia, he noted, far below the abilities of both countries and of their business communities. The forum will allow both countries to build on what has been achieved and provide specific proposals to increase investments at both countries.

Some sectors of interest he noted for bilateral collaboration included tourism, logistics, shipping and maritime transport, energy, and construction. He singled out tourism which in Greece is impressive and a global leader, while Saudi Arablia has a huge potential to grow in the sector. In shipping and maritime transport, another sector where Greece is leading, there is potential in upgrading Saudi ports and improving the logistics network, as well as investing in the country.

Saudi Arabia is known as a global superpower in petroleum and he would like to see it lead in the renewable energy sources sector as well, as well as in the green energy sector. Both countries could collaborate well in this sector, he pointed out. Noting also the experience, specialization and strong presence of the Greek construction sector in international markets for over five decades, he spoke of the construction projects in his country.

The minister said Saudi Arabia’s “Vision 2030” aims at placing the country among the 15 largest economies in the world.

Mitsotakis: Sovereignty of Greek islands not up for discussion

The sovereignty of Greece’s islands is not up for discussion, Prime Minister Kyriakos Mitsotakis has said, amid recurring Turkish provocations in the Aegean and the eastern Mediterranean.

The Minister of Development talks of Black Friday... and the household basket

Gastronomic heavy hitters aside, Santorini came in a very respectable 19th on the list.

The Egyptian farm workers will have the right to enter and stay in Greece for up to nine months before returning home.

On Thursday, Greek Prime Minister Kyriakos Mitsotakis delivered an address at an international conference entitled “The Next 50: The Future of World Heritage in Challenging Times, Enhancing Resilience and Sustainability”. The conference is being held at the eponymous Delphi site in south-central Greece.

Meloni: Greece and Italy can work on a solution to migration; sovereignty over Aegean Islands is undisputed

Athens mayor calls for a Tourist tax on Visitors