Mitsotakis Artifacts Collection at the new Archaeological Museum of Chania

The archaeological collection of hundreds of artifacts belonging to the late parents of Prime Minister Kyriakos Mitsotakis has been displayed at the new museum of Chania on the island of Crete, hometown of one of the most prominent political families in the country. 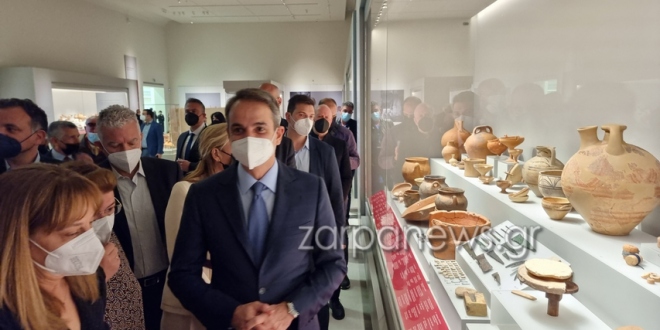 For the first time, the new museum established with EU funds, showcases more than 3,500 objects, including hundreds of artifacts from the antiquities collection of premier’s late parents, Konstantinos and Marika Mitsotakis.

Touring the museum on Friday, PM Mitsotakis described his parents’ collection as “one of their life’s most important projects” and pointed out that “they wanted it to belong to all Greek people.”

The new Chania museum, he added, “is a point of reference of Cretan culture, but also of all the influences it incorporated throughout the centuries.”

The Mitsotakis artifacts collection is exhibited in its entirety for the first time.

“The collection came to the ownership of the Greek state in April 2000, following the decision of the Central Archaeological Council to accept the donation,” notes state-run news agency amna. Another 1,000 artifacts have also never been publicly shown before.

As now many Greeks wonder on social media how the Mitsotakis family acquired the artifacts dated from the 4th millennium BC to 3rd Century AD, some recalled older media reports from 2017 revealing that the PM’s father Konstantinos Mitsotakis had obtained a collector’s license and kept his collection at his home in Chania. But he was “forced” to donate the collection to the Greek state in 2000 as the origins were questionable. Konstantinos Mitsotakis kept only 27 items for the purpose of keeping his collector license. Report in Greek at tvxs.gr

According to government affiliated newspaper liberal.gr on April 14/2022, the collection came to the Greek state in April 2000, following the recommendation of the Central Archaeological Council, which accepted the donation from the owners.

Konstantinos Mitsotakis had then expressed his joy, “because in this way our collection becomes the property of the people of Chania and Crete in the cultural heritage, to which it belongs. This collection was created by my wife and me with love, care, but also with effort and sacrifice. I can not hide that the collection cost us a lot of bitterness, because we received completely unjustified attacks, but this unpleasant page of Greek political life closes.”

According to liberal.gr, the 1062 objects of the Mitsotakis collection date from the end of the 4th millennium BC, until the 3rd century AD. Most of them come from Crete. The collection is considered one of the most important of its kind. the exhibition includes the categories: Minoan ceramics, pottery, stonework, jewelry, seal engraving, metalwork and varia (various objects from different regions).

Τhe new Archaeological Museum of Chania is located in Halepa. It extends over 6,000 sq.m. and has been funded with €3.5 million EU funds for Crete (Program 2007-2013 ανδ 2014-2020). The old Museum located at the Agios Fragkiskos Monastery closed down in September 2020, reports archaeologyonline.gr

The idea of a new museum goes back to the 1990’s to the then Director of the Chania Archaeological Museum, Maria Vlazaki, now Secretary General at the Culture Ministry, who is also the person who forced the Mitsotakis family to donate their collection to the Greek state.

Ms. Vrettou is not new to the Greek banking system, on the contrary, she has 20 years of rich experience both in Greece and abroad.

Greece started the match with an impressive 18-2 run. Although Poland scored a couple of baskets, the first 10 minutes belonged to Greece, and the home team led by a comfortable 17-point margin after the first quarter (27-10).

Next.e.Go Mobile, a company that was to build a production unit in Greece, has officially announced that after the small factory it will build in Bulgaria in 2024, it will proceed with the construction of the second one of a similar size in Skopje.

Residents of the island of Skiathos along with the Culture Association of Skiathos are appealing to tourists to “Take a picture, not a pebble” from one of their most beautiful beaches that is being destroyed.