The Thessaloniki metro will be operational at the end of 2023.

Trial runs for the trains at the new Piraeus stations of the metro will begin by the end of next week, Attiko Metro Managing Director Nikos Kouretas said on Wednesday.

Speaking at the Technical Chamber of Greece’s conference “Green Deal Greece 2022” at the Stavros Niarchos Foundation Cultural Center, Kouretas said that the stations on the new Line 4 will be turned over for use to the public at a date to be announced shortly. 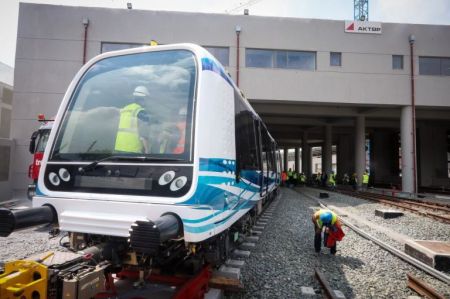 In addition, he said, the Thessaloniki metro will be operational at the end of 2023.

“Along with the three Piraeus stations that we will turn over to the public in the next two months, Lines 2 and 3 [Red and Blue] will end up serving over a million passengers a day, which means 200,000 fewer cars in Athens daily, and a drop by 880 tons of carbon dioxide,” Kouretas said.

The metro will also bring an improvement in the urban landscape with planting of trees, while it will also serve major facilities such as hospitals.

In addition, the barriers around Line 4 earthworks will be decorated with paintings using special pollution-absorbing colours developed by a Greek startup, Kouretas said.

Once completed, the three new stations – Maniatika, Piraeus and Municipal Theatre – will connect Piraeus with Athens’ centre and the Athens International Airport.

Ms. Vrettou is not new to the Greek banking system, on the contrary, she has 20 years of rich experience both in Greece and abroad.

The best-selling artist will perform hits tracks from albums like “Romanza,” “Sacred Arias,” “Si” and “Believe,” among other selections.

Next.e.Go Mobile, a company that was to build a production unit in Greece, has officially announced that after the small factory it will build in Bulgaria in 2024, it will proceed with the construction of the second one of a similar size in Skopje.

Residents of the island of Skiathos along with the Culture Association of Skiathos are appealing to tourists to “Take a picture, not a pebble” from one of their most beautiful beaches that is being destroyed.