Fr. Alex Karloutsos was among the distinguished personalities awarded the Presidential Medal of Freedom this week by US President Joe Biden, with the Greek Orthodox priest honored for his “exemplary contribution to the prosperity of the United States of America.”

US President Joe Biden presented the Presidential Medal of Freedom to 17 distinguished personalities during a grand event held at the White House on Thursday, with the honorees praised for having made an “exemplary contribution to the prosperity of the United States,” as characteristically stated in the official press release issued in Washington.

Among those honored was Fr. Alexander Karloutsos, a Greek, who was born in the village of Latzoi, Ilia prefecture, and who is considered as one of the most influential clerics in the history of the Orthodox Church in America. 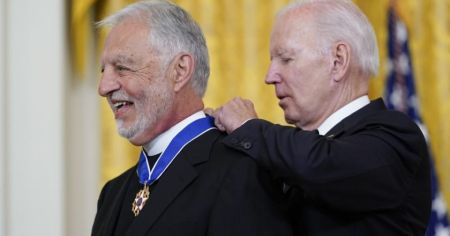 “Father Alex”, as he is called endearingly, is known for his tireless work in support and reinforcement of Hellenism around the world, as well as his dynamic position on issues dealing with religious freedom and human rights, having served for many years as a special assistant to the Archbishop of America.

He became a liaison with other Church Primates, the White House, the US Congress, federal and local office-holders, Greek-American organizations and political action committees.

Fr. Alexander was the force behind the effort to rebuild the St. Nicholas Greek Orthodox Church at the World Trade Center in Manhattan, which was destroyed in the Sept. 11, 2001 terrorist attacks, and which was consecrated on Wednesday — 21 years after its destruction.

Fr. Alexander is also the spiritual guide for the Order of St. Andrew, Archons of the Ecumenical Patriarchate in America.

The White House statement regarding Fr. Alexander reads: “Father Alexander Karloutsos is the former Vicar General of the Greek Orthodox Archdiocese of America. After over 50 years as a priest, providing counsel to several U.S. presidents, he was named by His All Holiness Ecumenical Patriarch Bartholomew as a Protopresbyter of the Ecumenical Patriarchate.”

Fr. Alexander is the third individual of Greek descent who has been awarded the Presidential Medal of Freedom by a US President. The first was the late Archbishop Iakovos, who was presented with the Medal 42 years ago by then US President Jimmy Carter. George Tenet, the former director of the CIA, was honored with the distinction in 2004 by then President George W. Bush.

Another 16 distinguished individuals were honored during the Thursday event at the White House, including actor Denzel Washington, a Manhattan nurse who was the first American to receive the Covid-19 vaccination after clinical tests, gymnast Simone Biles, one of the greatest Olympic athletes of all time, as well as the late co-founder of Apple, Steve Jobs,