Cycladic marble figurines emanating from the Cyclades, a group of islands in the Aegean, are among the most enigmatic and iconic artefacts from the Greek Bronze Age to have survived antiquity.

The Greek Ministry of Culture and Sport has just negotiated an agreement in principle with Leonard Stern, one of America’s richest men and a voracious art collector, and the Metropolitan Museum of Art in New York for the exhibition and eventual return of 161 Cycladic artefacts from the Stern collection.

The ramifications of this ‘deal’ are immense, not just in reclaiming rare sculptures but in offering a potential template for negotiating the return of other contested cultural property, including most notably the Parthenon Sculptures in the British Museum. 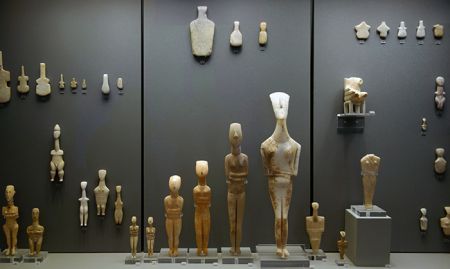 Cycladic marble figurines emanating from the Cyclades, a group of islands in the Aegean, are among the most enigmatic and iconic artefacts from the Greek Bronze Age to have survived antiquity.

The appearance of the elegant 5,000 year old figurative idols and their minimalist and abstract rendering of the human body in early Cycladic sculpture is striking. These highly stylized statues, together with marble vessels and other artefacts, were usually buried with the dead as votive offerings.

In particular, the female marble figurine is distinctive, with the head and body straight and the legs held together, toes pointed down, and arms folded and held tightly across the body, in balanced proportion.

In April 1990 an exhibition titled ”Masterpieces of Cycladic Art” was held at the Merrin Gallery in New York and featured a number of statues, including exquisite marble female figurines. It was reported in the New York Times that the “austere whiteness” of these statues was also a major attraction for Leonard Stern, a billionaire who amassed his fortune through the sale of pet supplies, real estate and renewable energy innovations.

According to Stern, who had loaned 10 figures from his sizable collection to the Merrin exhibition:

”Cycladic sculptures do something to me, and I am not sure why.”

As it turned out Stern went on to amass 161 rare early Bronze Age Cycladic artefacts and it is suggested that many items in his collection may have unspecified provenances, leading some experts to speculate that they were likely illegally excavated, certainly before the 1960s and perhaps later, when illicit archaeological digs were rampant in the Cyclades.

As the famous British archaeologist Lord Renfrew has written, it is tragic situation that most of the Early Cycladic sculptures now kept or exhibited in the world’s museums apart from the state museums of Greece, as well as nearly all those in private collections, are the product of clandestine and illegal excavations.

Secret negotiations with Stern commenced some two years to try to convince the American billionaire to “donate” his collection to Greece after the Greek Government was informed that he had approached the Metropolitan Museum of Art (Met) to transfer his collection.