Marinakis and Scaroni: How Europe will tackle the energy crisis and achieve the green transition

Pagenews.gr / English Edition / Marinakis and Scaroni: How Europe will tackle the energy crisis and achieve the green transition

“Europe is facing one of the its toughest winters” pointed out Mr Evangelos Marinakis, chairman and founder of Capital Maritime & Trading Corp., as he began his speech at the Economist conference in Thessaloniki where he participated in a panel with Paolo Scaroni, deputy chairman of the Rothschild Group, chairman of Milan and former CEO of ENI.

It is the question of how Europe will be able to cover the real energy deficit it faces due to the interruption of Russian gas flows, a deficit that will be even more acute if this winter proves severe, while they also discussed the risk that the measures taken to deal with the energy crisis will ultimately be a setback in terms of decarbonisation and green transition.

And a panel attended by the chairman of a leading Greek shipping group – currently leading the way in LNG transportation and the transition to green shipping – and the former CEO of an energy giant and now a leading executive of a global financial group, proved to be the right forum to have this discussion. 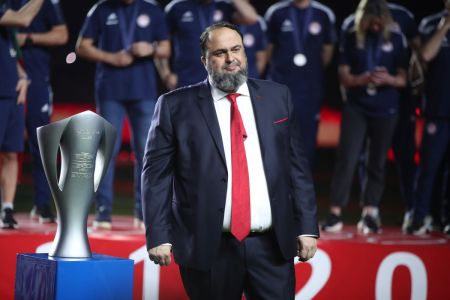 Europe is facing one of its toughest winters.The War in Ukraine has been the catalyst that has helped us realize the challenges that we are facing:

-challenges that have to do with collective security, peace and stability and how to deal with the fact that because of Russian aggression, Europe is becoming a theatre of war,

– challenges that have to do with avoiding conditions of energy poverty and social crisis.

– and challenges that have to do with becoming less dependent upon fossil fuels.

And it is true that Europe has shown a lack of preparedness: both in relation to having a strategy to avert aggression and war and in relation to dealing with possible energy crises.

But I do think that Europe can still stand up to the challenges.

Take energy for example. There has been a tremendous effort to replace Russian gas with LNG, after we realized that pipelines from a single provider were becoming a liability, a trap.

That is why we have tried to help as much as possible with the transportation of LNG, even before the disruption of the supply of natural gas caused by the war.

Shipping offers a reliable, flexible and efficient way to transport LNG wherever this is needed and without the geopolitical, technical and environmental problems of large-scale pipeline projects.

And we are proud that Greek shipping is today a leading force in the transportation of LNG.

Almost one out of six LNG carriers being built in the world today will be delivered to Greek shipowners.

Capital invested more than $3.2 billion in LNGCs over the last four years.

This is how serious we take working towards reducing Europe’s dependence on a single supplier and this is how we enable Europe’s answer to the current energy blackmail by Russia.

Increased investment in LNG infrastructure in Europe is today –and until a new wave of renewable energy projects is in place – the only solution to have a less energy-dependent Europe.

And at the same time this is a step towards a greener future, because we all know that natural gas is the crucial ‘transition fuel’ in any serious effort to decarbonize.

Investing in LNG infrastructure is now a much better solution than returning to increased use of coal and lignite, fossil fuels with significantly worse environmental impact.

But of course the challenge of Green transition is not limited to increased use of natural gas.

The easiest thing would be to come here and say: Shipping is not the biggest contributor to climate change and global warming. It only contributes 3% of greenhouse gases even though it is responsible for 80% of global transport.

But in shipping we do care about climate change.

In particular in Greek shipping!

After all when discussing climate change we are not talking about the distant future.

We are talking about large segments of the planet being uninhabitable by 2050, unless we take urgent action today.

We are talking about areas – including small island nations – being covered by water.

We are talking about mass climate migration.

We are talking of large disruptions in agriculture.

We are talking a global crisis, the biggest that humanity has faced in modernity

Greece is in a position to contribute significantly to climate change as it controls the largest commercial fleet in the world including:

34% of the world oil tanker fleet

24% of the world bulk carriers

19% of the world chemical & product tankers

8% of the world containerships

There are many in the shipping industry that basically just want to ‘buy more time’. Get more exceptions for shipping. Postpone the transition to Green Shipping.

We should go the opposite direction.

By increased research on low to zero-carbon fuels, from biofuel-blended marine fuel to the research on ammonia fuel cells.