Giannis Antetokounmpo is No.1 on ESPN’s list for the 2022-23 season

Pagenews.gr / English Edition / Giannis Antetokounmpo is No.1 on ESPN’s list for the 2022-23 season

Last year, the "Greek Freak" was No. 2 but this year he rose to No. 1. According to ESPN: "Arguably no player in the league can match his impact on both ends of the floor."

A new distinction has been added to Giannis Antetokounmpo’s already impressive CV in the NBA world.

The champion and two-time MVP of the world’s premier basketball league is No. 1 on ESPN’s list of the top 100 players of the 2022-23 season.

Last year, the “Greek Freak” was No. 2 but this year he rose to No. 1. According to ESPN: “Arguably no player in the league can match his impact on both ends of the floor.”

To justify the decision, the leading network writes about Giannis: “From the pure consistency and the reliable dominance each night from Antetokounmpo, his claim on the status as best player in the world has only been strengthened in the past year. Arguably no player in the league can match his impact on both ends of the floor.” 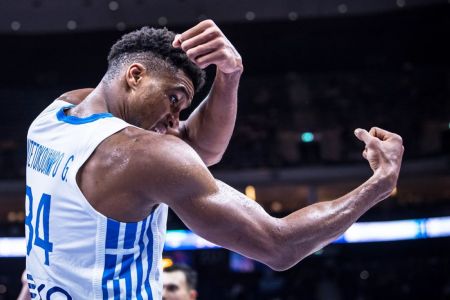 “To follow up winning his first Finals MVP, Antetokounmpo challenged for the scoring title, averaging 29.9 points (third in the NBA), while grabbing 11.6 rebounds, dishing out 5.8 assists with 1.1 steals and 1.4 blocks per game. Even though Milwaukee was without its second best player, Khris Middleton, during their second-round playoff series against Boston, the Bucks extended the series to seven games on the will of Antetokounmpo, who averaged 31.7 points, 14.2 rebounds and 6.8 assists in the postseason.

“What new skill will Antetokounmpo bring to the table? After each offseason, Antetokounmpo emerges with a new skill in his arsenal. Over the years, he has refined his vision as a passer, has improved an outside jumper that keeps defenses guessing and has become more unstoppable attacking the paint and in the post. Is it possible for Antetokounmpo to get even better?”

At No2 is Nikola Jokic and at No3 is Luka Doncic. The Europeans, as the tribute notes, will dominate the NBA this season. At No. 5 is last year’s champion Steph Curry and at No. 6 is LeBron James.