Called Hydroussa in antiquity because of its abundance of water, it is the lushest of the usually somewhat barren islands in its group, and trekking groups such as Andros Routes have worked hard to make it idyllically walkable.

However, as more visitors arrive to explore its scenic landscapes and picturesque historical landmarks such as towers, archaeological sites, and springs, the island is beginning to cater more to holistically-minded wellness seekers and outdoorsy adventurers.

Within the last decade, and especially the last few years, the island’s inhabitants have been developing more natural, organic, traditional products and creating healthy hubs.

Since the summer of 2018, Andros’ picturesque main town of Chora has had the island’s first official juice and health-food bar, Fresco. 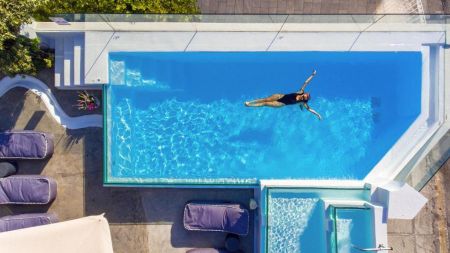 In an agora that used to be only about coffee, ice cream, pastries and cheese pies (not that there’s anything wrong with the delicious variety found here, especially the locally made almond biscuits, amygdalota), Fresco was a welcome arrival for both Andriots who like a healthy kick and tourists who are well accustomed to such options.

Check out the five-star Micra Anglia boutique hotel set up separately from the hotel.

Located in a cave-like environment decked out in understated luxury with natural materials and soothing neutral tones, the spa offers a jacuzzi and hammam as well as a variety of beauty and wellness treatments and therapies.

Andros Routes was set up in 2010 by the Andros Research Centre and is run by a dynamic team headed by Olga Karayianni.

Over the years, the team had welcomed volunteers from around the world who had helped them clear old stone-paved or earth kalderimia foot and donkey trails that locals used before cars existed on the island and mapped out many routes.

One can buy a walking map from most tourist stores and go solo or book a hike with the organisation, which caters to people of all ages and walking experiences and offers a historical and cultural tour of the landscapes.