Today, 1st of October, 2022, is international coffee day and to celebrate we give you 5 great reasons to make yourself another Elliniko Kafe, which is considered the healthiest coffee in the world!

Celebrating International Coffee Day with Elliniko Kafe, the world’s healthiest coffee Worldwide studies throughout the years have shown that Greek coffee has major health benefits, going as far as to say that drinking a cup of Greek coffee a day can increase your lifespan!

The major difference between Greek coffee and other caffeine is that Greek coffee is typically sipped slowly in social gatherings, with family and friends at a home or in a café, highlighting the fact that part of the health benefits beyond the drink itself may also be connected to the leisurely pace of Greek lifestyle, which is said to reduce overall stress. 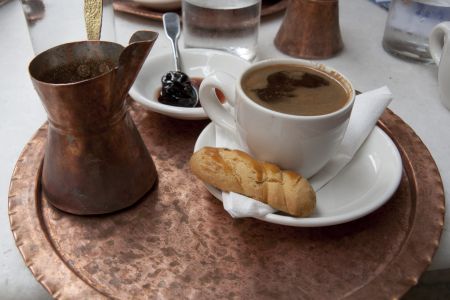 In a study a few years back, researchers found that elderly residents from the Greek island of Ikaria, who drank boiled Greek coffee at least once a day displayed better overall cardiovascular health. Ikaria is one of the world’s seven ‘Blue Zones’ and has been documented as one of the regions where people live well past 90, at a significantly higher rate than the rest of the world.

“In general, coffee is one of the most consumed beverages worldwide is considered to be good for the heart since this beverage contains high levels of protective antioxidants and polyphenols. However, what makes Greek coffee superior to your average cup of Joe is its concentration and preparation, both of which deliver more protective compounds in each little cup,” says Dr. Oz, one of the world’s most famous doctors.

Rich in chlorogenic acid, polyphenols, lipid-soluble substances, and other heart-healthy compounds, Greek coffee has been shown to help protect the arteries, as well as lower your risk for diabetes and boost overall immune health.

According to the study, those who drank Greek coffee had healthier blood vessels. What’s more, the research suggests that Greek coffee protects against endothelial cell dysfunction, a type of heart disease that is particularly lethal to women and is on the rise.