Greek islands chock full of brides and grooms who had put off getting married due to coronavirus, and Santorini tops all

This year is going to be a record year for weddings in Greece, and the Greek islands, starring Santorini, seem to be gaining a significant share of the pie. Now more than ever, brides and grooms from around the world are flocking to the Caldera for vows of eternal love…

As the Municipality of Thira pointed out to “NEA” newspaper there has been a huge surge in weddings this year since the beginning of the season. It seems that weddings scheduled to take place in 2020 and 2021 were canceled, with the result that this year, from the end of March and the beginning of April, the weddings on the island have started en masse. 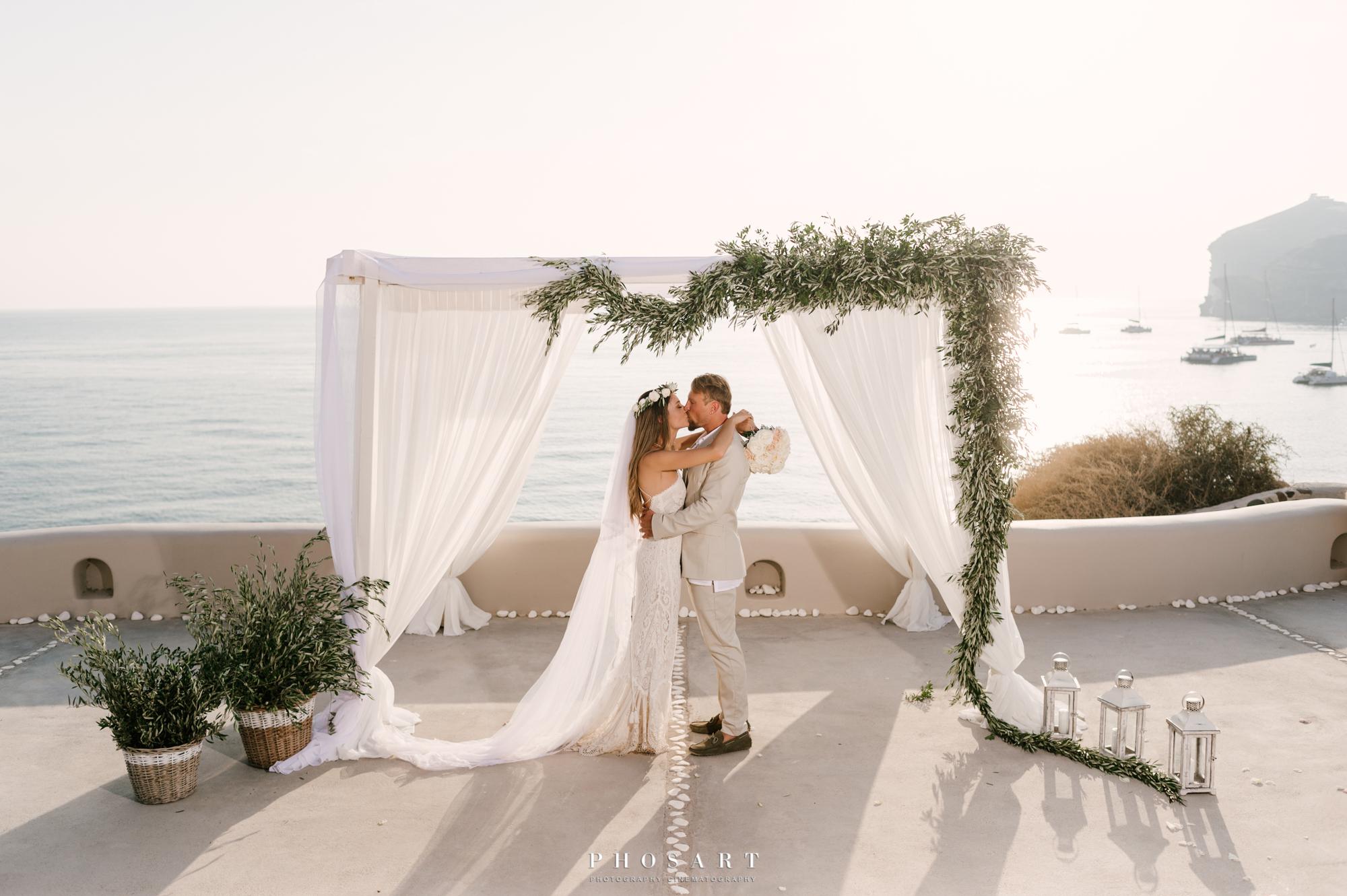 About a thousand weddings a year take place on Santorini which has 15,000 inhabitants. 90% of them are visitors from abroad, while more than 60% are from the UK.

The weddings bring a huge turnover to the island. “Most people come to get married, bringing with them from 50 to 150 guests, while returning to their homelands with the wedding photos, they advertise the island even more”, say local officials.

The mass influx of brides is also confirmed by the wedding planners based on Santorini, with those involved pointing out that the real increase is even greater than the one reflected by statistics.

This is because in addition to the official weddings that are undertaken by City Hall, hundreds of others are held informally in the most picturesque parts of the island.

As the municipality pointed out: “Asians, mainly Chinese and Japanese, who have already gotten married in their country, come here with their entourage and the tour operator they have chosen, undergo a ceremony in which they say “I do” and are photographed with their wedding dresses or with some colorful dresses overlooking the Caldera. So you can see 10 or 18 Chinese newlywed couples waiting on the steps to be photographed.”

It is not only the dreamy landscape that attracts brides and grooms, but also the relatively low cost of the process. According to recent data from the Wedding Price Index, on the accommodation search platform Holidu, Santorini, which is very high in the preferences of newlyweds internationally, ranks the island 36th in terms of cost among the 100 most popular destinations in the world.

The high demand is also combined with the rapid increase in international arrivals observed this year on the island. In May alone, there was a 36% increase in foreign tourist arrivals compared to 2019, ie from the pre-coronavirus season, while bookings for the rest of the season foreshadow an increase in the number of visitors. 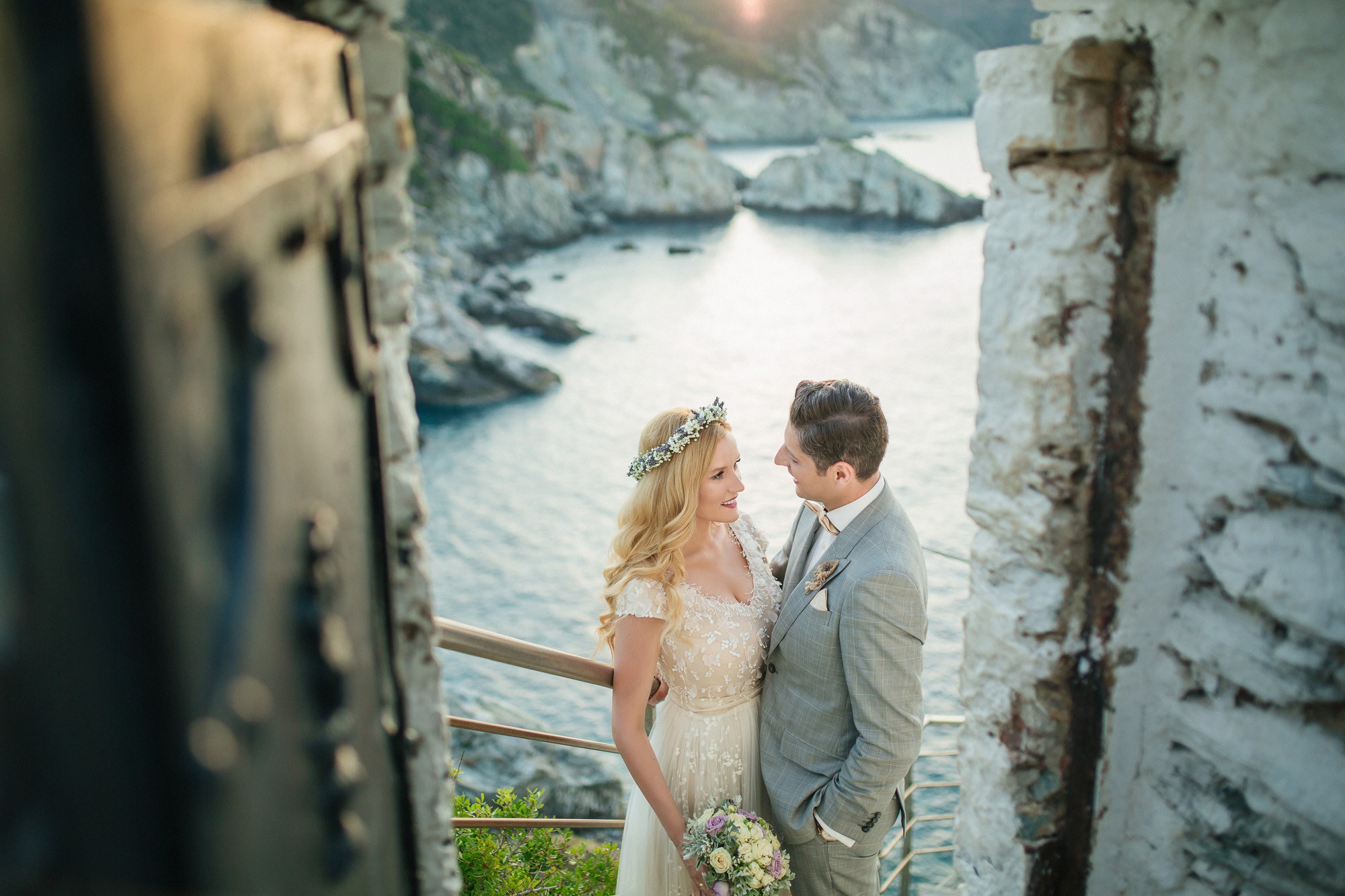 “I do” from Skopelos to Naxos!

Although Santorini is the “wedding” flagship, the increased demand concerns other islands of Greece. The fact is confirmed by Ioanna Efstathiou, chairman of the tourism committee of the Municipality of Skopelos who notes that weddings have made a dynamic comeback to her island. “We are already seeing an increase of at least 30% compared to the pre-pandemic era,” she notes.

Also, Skopelos is in great demand for renewal of vows or for marriage proposal events that take place mainly at the place where the movie “Mamma Mia” was shot, and many come from abroad for this purpose, mainly British, but the international airport of Skiathos that serves Skopelos also has direct flights from Scandinavia, the Netherlands, Poland and Paris.

Apart from Skopelos and Santorini, Crete, Ios, Folegandros, Rhodes and Naxos have also begun to be established as international dream destinations for weddings. Just four days ago, actor Alex Pettifer and supermodel Tony Garn chose Paros to renew their wedding vows, while some islands are particularly popular in distant markets, such as India.

Indicative are the three luxury weddings with Bollywood fragrance that took place in June in Rhodes, Paros and Crete, as Indian tycoons, living in the USA and Britain, organized weddings there – blockbusters combining “I do” with unique holidays in GREECE.

A Greek ‘golden visa’ and how to get one

Amorgos completely booked out in July and August

Considering the natural beauty of Amorgos, it is little wonder why tourists are flocking to this island like never before.