These estimates are also embraced by large firms such as HSBC and Bank of America, with the former upgrading its forecast for Greek growth this year to 6.5% from 4% previously and the latter speaking of a significant positive effect.

Tourism is proving the main factor offsetting the effects on the Greek economy from the global energy and inflation crisis, as its dynamic recovery this year, possibly at levels 10% higher than the record year of 2019, is creating expectations for higher-than-expected growth.

Estimates on the secondary, indirect benefits from tourism in other sectors of the economy, point to an extra 52.89 billion euros in value for the gross domestic product this year. All this, of course, is only under the condition that no unpredictable negative events emerge that could adversely affect tourism.

That amount of €52.89 billion, which corresponds to about 28% of the projected GDP in 2022, is derived from the multiplier of 2.65 that economists assign to tourism and the estimated increase in travel receipts this year to €20 billion, from €18.2 billion in 2019. 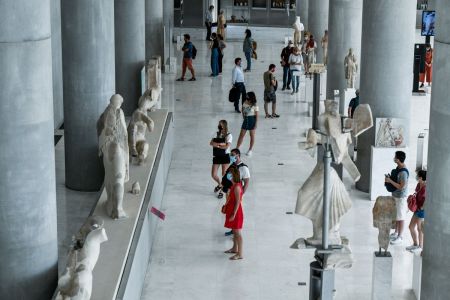 These estimates are also embraced by large firms such as HSBC and Bank of America, with the former upgrading its forecast for Greek growth this year to 6.5% from 4% previously and the latter speaking of a significant positive effect

The rationale of the 2.65 multiplying factor is simple: Each hotel spends a large portion of the money it collects on wages, which in turn boosts household disposable income that is also spent in the economy. At the same time, the increase in arrivals creates needs for additional staff, thus boosting employment. In addition, spending by hotels on supplies, from food and beverages to fuel and electricity, and from maintenance to transportation, boosts the income of other industries and so on. Travelers also spend money outside the hotels, while the general boom in the sector also mobilizes new investments, strengthening the construction and other sectors.

Research by Grant Thornton and the Hellenic Chamber of Hotels shows that the benefits of tourism are spread across 17 branches of economic activity and nine sectors of the Greek economy, including the primary sector, manufacturing, wholesale and retail commerce, transport and logistics etc.