The memorandum was signed by the President of the Greek Health Tourism Council – ELITOUR and Governor of Region of Attica, Mr. George Patoulis and the President of Hellenic Chamber of Hotels Mr. Alexander Vassilikos

The memorandum was signed by the President of the Greek Health Tourism Council – ELITOUR and Governor of Region of Attica, Mr. George Patoulis and the President of Hellenic Chamber of Hotels Mr. Alexander Vassilikos 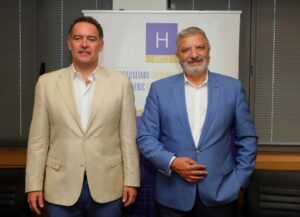 The objectives of this important and strategic cooperation between Greek Health Tourism Council – ELITOUR and Hellenic Chamber of Hotels, as mentioned in the Memorandum of Cooperation are, on the part of Hellenic Chamber of Hotel is the participation of the country’s hotel accommodation in the development of health tourism and in hosting of health travelers, medical and thermal travelers and on the part of ELITOUR, as the major national cluster for Greek Health Tourism, the promotion and the development, of the Greek Health Tourism product, for the benefit of the involved entities and the national economy. In particular, Elitour’s council, aims to support the achievement of the objectives of Memorandum, ensuring on its part, business coordination and cooperation and foreign health agencies, with relevant internal partners and other issues of mutual interest.

The President of the Greek Health Tourism Council ELITOUR and Governor of Attica, Mr. George Patoulis, described the signing of the MoU as crucial importance Memorandum for the expansion of tourism 12 months per year and the prospects for developing and promoting of Greek Health Tourism “While the world Health Tourism, Medical Tourism and Wellness Tourism, makes a strong comeback, pursuing to could elevate more targeted and decisively, the health and the well-being of travelers, after two and half years of pandemic” as he said.

The President of ELITOUR and Governor of Region of Attica, stressed that the same conditions on the international market and the worldwide development of Health Tourism, necessarily dictates that any cooperation, such as the one signed with the memorandum ELITOUR – Hellenic Chamber of Hotels : “The Health Tourists and traveling families in order to have health, thermal and wellness services, have a lot of obvious needs, such as efficient transport, accommodation, food service, shopping and tourism activities. But there are also intangible goods, as described and concern the hotel culture industry: includes experience before the arrival and experience of hosting until departure. Therefore a wisely designed Health Tourism destination, must understand the evolving demands of health professionals, to plan services, products and business models to respond”.

The President of Hellenic Chamber of Hotels Mr. Alexander Vassilikos declared: The thematic diversification and the enrichment of our product are a strategic choice for the sustainable future of Greek hospitality. For this reason the Hellenic Chamber of Hotels, has prepared since 2011, the study on the development of medical tourism in Greece. In this direction, the emergence of Greece, as a world destination of health and wellness tourism, is highlighted as a first-line priority, for which we deserve to join ideas and forces.