Once upon a time, during the Neolithic Age, the prehistoric inhabitants of the island sculpted the rocks of the area and later, during the Roman occupation, these rocks were used as graves.

The first people that went to Matala and stayed in these sculpted caves were “Beatnik”, in 1965. These bohemian hedonists, praised their independence from the conservative society, the American dream and the acquisition of material goods and experimented with sex and hallucinogenic substances. Two years later, Hippies arrived. They stayed in the caves as primitives.

During winter they wore lamb’s wool to protect themselves from low temperatures and during summer they were half-naked.

Most of them were highly educated and had consciously chosen to refrain from consumer society. They chose to live with peace and meditation. They wanted to be one with Mother Nature, to become “Children of God”. 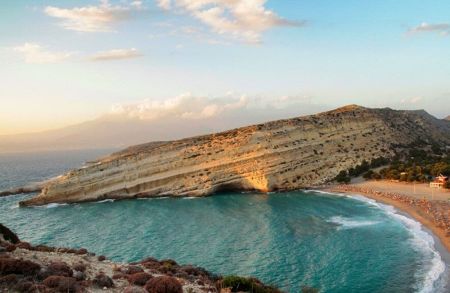 Inside these caves, a famous love story began a story that would remain in rock history forever, as it stood in the tradition of an immortal «child». The song “Carey” was written by Joni Mitchell about Carey, a Hippie who came from America to find the real meaning of life and to discover its truth.

Matala became known in a somewhat peculiar way. The first person who revolted against the hippies was Michalis Vamvoukas, who despite his young age started sending letters to the Cretan newspaper “PATRIS” asking for the “vulgar” to be removed, but also to the Despot of the region, who was convinced that Orthodoxy was at risk. Then, Metropolitan Timothy (later Archbishop of Crete) issued a circular against the hippies. The circular was also published by Athenian newspapers and made international headlines.

American Magazine “Life” sent a journalist to Matala and in July 1968, the magazine’s cover featured a young couple in the Matala Caves, with Thomas Thompson’s write-up and stunning pictures of Denis Cameron. Everyone was reading about Matala, the Land of the Hippies Promise!

Today, Matala caves have been fenced, protected by the Archaeological Service and are accessible to tourists for Free but no one is allowed to live there or stay overnight.