Ios: The island with 365 churches

Ios took its name in ancient times from the word Ia, meaning the flowers that grew abundantly on the island.

Magical beaches, organized or inaccessible, amazing sandy shores… This is Ios, the beautiful island of the eastern Cyclades which is waiting for you to discover and enjoy it.

Ios is located between Naxos and Santorini and will surely win you over with its natural beauty before you even set foot.

It may not be such a big island, but it combines countless options for all ages. From intense entertainment to quiet secluded places to relax. Waters that you want to drink, colors on the seabed that take your breath away, beaches for hermits, but also for parties. 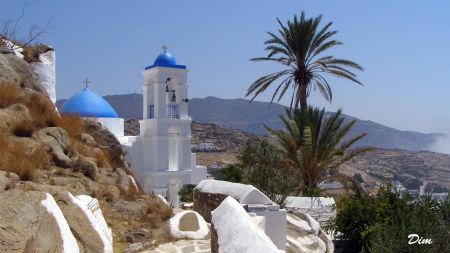 In Ios there are several areas of archaeological and historical value, such as the proto-Cycladic settlement of Skarkos, the ruins of the medieval castle of the ancient city located in Chora, ruins of thermal springs and other buildings in Psathi and Agia Theodoti, while on Paleokastro hill there are ruins of of the Byzantine Castle of the same name, which served as an observatory, alerting the hinterland, of any threat from Pirates but also for the surveillance of the sea routes leading to Crete.

Speaking of culture, in Ios one must visit the Archaeological Museum, the Jean-Marie Dro Museum of Modern Art, the Gaitis Museum, but also the Folk Art Museum. You should not miss the open-air theater “Odysseus Elytis”, a theater with perfect acoustics built with local stone and marble, which hosts important cultural events every year.

On the eastern edge of the capital Chora is Mylon Square, where you will see the 14 windmills, which played an important role in the economy and social life of the island in the past. The Lighthouse is also open to the public and is located in the “Fanari” area at the left entrance of the Port and is a building of 1881.

Local legend has it that there are 365 churches on the island, one for each day of the year. One of them is Panagia Gemiotissa, the trademark church of the island located at the top of the Chora hill.