The AMR robots changed the sorting center of Thessaloniki, turning the time-consuming process of sorting mail and packages into a "game", minimizing errors and the delivery interval of the items

They scan the postcodes, weigh the parcels and with quick movements transport them and place them in the postal sacks that will take them to their destinations.

The AMR robots changed the data in the sorting center of Thessaloniki, turning the time-consuming process of sorting mail and packages into a “game”, minimizing errors and the delivery interval of the items. 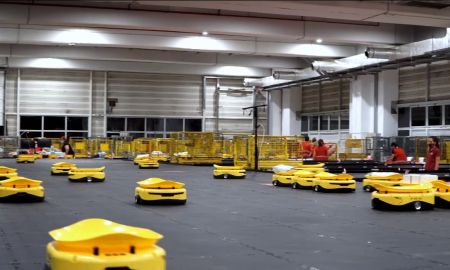 “Our goal is to make a significant leap forward and to stand out from the intense competition that exists in the courier market”, pointed out Hellenic Post-ELTA CEO Giorgos Konstantopoulos during the special presentation of the robotic sorting facility at the ELTA Sorting Center in Thessaloniki and noted that the yellow robots, thanks to the ability to transport from a simple envelope, up to a parcel weighing 10 kg, can manage 80% of incoming items, weigh them automatically and send them with absolute precision to the recipient’s bag for prompt shipment, and without the slightest error.

The general manager of ELTA’s Sorting and Forwarding Centers, Argyris Asimakopoulos, underlined that, “the Sorting Center of Thessaloniki has the capacity to manage 3,000 items per hour and in a full sorting program, it can manage over 70,000 parcels twenty-four hours” and. The robots are 45 and the outputs are 120, which is scalable according to the needs that arise.”

For his part, the general director of sorting operations of ELTA, Savvas Dandalos, emphasized that the specific mechanism, “can also sort for Southern Greece, as a result of which we gain one day of processing. One of the most important facts, however, is that we managed to practically zero out sorting errors and by extension customer complaints. While manual sorting can reach a 10% error rate, currently with our statistics the error that occurs is of the order of 0.004% and this is due to the bad printing of the barcode.

The 45 autonomous robots have the potential to manage up to 3,000 parcels per hour in Thessaloniki and in Athens respectively 155 robots can manage 7,000 parcels per hour while it is impressive that they move non-stop for four hours separating mail and parcels, with just four minutes charging!

“Our human resources are not affected by this revolution. They stay the same. Their work simply becomes safer, more efficient, cleaner, quieter and more pleasant” explained Mr. Konstantopoulos and noted that “the automated robotic screening offers a covid-free environment, with maximization of health and safety conditions, both for workers, as well as for consumers”.

The robotic sorting system, noted Mr. Konstantopoulos, is not only a great and unique technological innovation, but it is a pivotal point in the digital transformation of ELTA, because it forms the starting point for what is being prepared over the last few months.

He also referred to the “Digital Postman”, explaining that it “includes, the human factor, the distributor who, however, will now have at his disposal modern digital tools with almost unlimited possibilities” and the smart boxes, the ELTA “PickUps”, in which the customer will be able to deliver or receive his parcel, package or mail 24 hours a day and seven days a week.