Mitsotakis said that Greece can assist in this direction due to the infrastructure it is developing on the energy map and its position. He stressed Greece’s role in benefitting energy security in the region, and thus highlighted its leading role in southeastern Europe.

Prime Minister Kyriakos Mitsotakis on Tuesday received the Prime Minister of North Macedonia, Dimitar Kovacevski, at the Maximos Mansion in Athens for a meeting dominated by the energy crisis that is currently affecting Europe.

According to sources, they also reviewed bilateral relations and the prospects for multi-level cooperation between the two neighboring countries as regards energy, energy infrastructure and the need to diversify energy sources and enhance connectivity.

Mitsotakis said that Greece can assist in this direction due to the infrastructure it is developing on the energy map and its position. He stressed Greece’s role in benefitting energy security in the region, and thus highlighted its leading role in southeastern Europe. 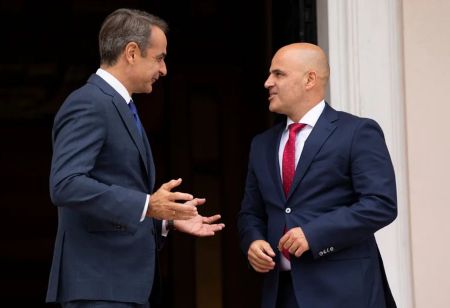 He also congratulated Kovacevski on the first North Macedonia-EU Intergovernmental Conference, the first phase of EU accession talks, and reaffirmed Greece’s support for North Macedonia’s EU accession based on the criteria that have been set, such as respect for good neighborly relations and the full, consistent and good faith implementation of the Prespa Agreement.

“Today is for us an opportunity to discuss the serious challenges that our countries face with respect to the increased cost of energy. I would like to repeat that Greece is prepared to support North Macedonia in these very difficult times. And I believe that it will be in our mutual interest if Greek companies invest in North Macedonia in order to connect our infrastructure in such as way as to lead to an increase in energy bonds between our countries,” Mitsotakis said.

Replying, Kovacevski noted the high level of relations between the two countries and Greece’s support for the start of accession talks with the EU and agreed on the importance of maintaining close ties with Greece as regards raw materials supplies, the production of electricity and for the continuation of successful Greek investments in North Macedonia, especially in the energy sector.

“As two neighboring countries, I believe that we can serve as an example of good neighborly relations, not only in the region but throughout Europe,” he added.

The meeting between the two premiers was followed by talks between the delegations of the two sides, with the participation of Greek Environment and Energy Minister Kostas Skrekas, Deputy Foreign Minister for Economic Diplomacy and Openness Kostas Fragogiannis and close aides of the prime minister on the Greek side. Participating in the delegation from North Macedonia were the country’s finance minister, Kreshnik Bekteshi and the Ambassador of North Macedonia to Greece, Lidija Boskovska.