Actress Irene Papas will be remembered not just for her roles in great films, but also as the embodiment of an ancient aesthetic

Greece is mourning the loss of its last truly international actress of stage and screen. Irene Papas died at the age of 96 on Wednesday at her home in the downtown Athens district of Plaka after a lengthy battle with Alzheimer’s.

Her indomitable spirit, her piercing gaze and her wry sense of humor – all those traits that underscored the remarkable, almost archaic, physical beauty that was so widely lauded – were gradually erased over the last decade by the disease, which forced her to withdraw from both the artistic and social sphere.

Her passing, however, came as a reminder of all the great things that earned Papas the reputation as one of the world’s most important and famous 20th century Greek women. 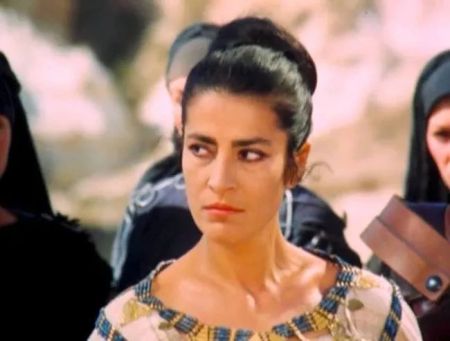 It is not just that she made cinematic history and won numerous awards for iconic roles; it is not just the legendary films she appeared in or the way she forever left her mark on cinematic adaptation of emblematic ancient Greek dramas; it is not the great directors she worked with or even the great stars she acted beside – from Marlon Brando and Anthony Quinn to Yves Montand and Katharine Hepburn. A modern version of an archetypal figure emitting beauty, inner strength and a sense of mystery, it was her poise and her eyes, her energy and her Mediterranean spirit that won over the world and contributed to the making of one of the most powerful legends of Greek womanhood last century.

Yet Papas herself was unaware of her own radiance. “Are you really the independent and untamed spirit of your legend?” she was asked in an interview with Kathimerini in 2003. She answered:

“I don’t even know what ‘legend’ means. I am inside the airplane, not outside it, describing it. Sometimes I do feel like I am watching myself, like when I’m doing something I know younger Irene wouldn’t like. And I wonder why she wouldn’t like it. It’s this division, this human schizophrenia that we all have inside of us, just as we are all judge, prosecutor and inspector of our selves… so, I don’t know if I am a wild and independent spirit. What I do know is that I try to be OK with myself – to the extent that this is possible. I try to like and appreciate myself, not to do things I’ll disdain myself for.”

Charismatic, dynamic and indeed independent in spirit, Papas was born Irene Lelekou in Chiliomodi, Corinthia on September 3, 1926. She took life into her own hands at a young age and openly defied her parents at the age of 18 by deciding to set off for a life on the stage and, more importantly, to marry writer Alkis Papas. As a student at the National Theater School of Dramatic Arts she decided that the conventional style of acting in the ancient tragedies was not for her and turned to more commercial forms of theater.

Her introduction to an international audience came in 1951 with Frixos Iliadis’ “Dead City,” which was screened at Cannes. The influential French festival paved the way for her to embark on an international career that included big-budget productions, privileged relationships with top directors (including Michael Cacoyannis and Franco Zeffirelli) and the formation of a very special bond with Italy, which is where she spent a good part of her free time.

The country she regarded as a second home honored her back: President Giorgio Napolitano gave her an honorary distinction, she was awarded the Prize of Rome at the Ostia Antica theater in 2008 and received the Golden Lion from the Venice Biennale in 2009.

Yet Irene Papas never lost touch with Greece and her roots. The Irene Papas School of Athens, a new center for the theater that was inaugurated just before the onset of the pandemic and is currently home to the National’s drama school, was one of her lifelong visions. In 1995, moreover, she received the award of Commander of the Order of the Phoenix from Greek President Kostis Stephanopoulos. Because once a Greek, always a Greek.