Pagenews.gr / English Edition / 50 Cent and Konstantinos Argiros will perform together at OAKA

Konstantinos Argiros is preparing to make a most unexpected collaboration, with the legendary American rapper 50 cent.

The beloved Greek singer will appear together with the rapper at OAKA in Athens, a fact that surprised the fans of both as they did not expect this ever on stage.

The concert – with Panik Records being the brainchild behind it, will take place on October 29.

50 Cent will complete this year’s tour with this appearance and will be in Athens for the first time in 16 years.

The concert will be opened by Josephine, FY and the Kings. Special guests include Light and Rack. 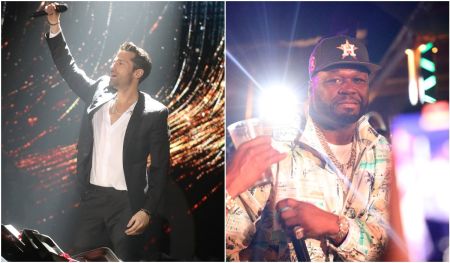 50 Cent was in Mykonos in August to enjoy some moments of relaxation on the island, but also to perform at a well-known nightclub.

The famous American rapper sang for two hours at “SantAnna”, receiving 250,000 euros, plus another 50,000 euros for his plane transportation costs.

The 47-year-old rapper, known as Curtis James Jackson III, began to rap and the patrons of the club began to dance to his rhythms.