Carras, who passed away on February 28 at the age of 84, was awarded the Grand Prix for International Relations for his tireless efforts to protect and preserve Greece’s and Europe’s cultural and natural heritage for future generations.

The extraordinary life and work of the late Costa Carras, visionary conservationist and co-founder of the Elliniki Etairia Society for the Environment and Cultural Heritage (ELLET), Greece’s largest environmental organization, was formally honored at this year’s Europa Nostra Awards in Prague.

Carras, who passed away on February 28 at the age of 84, was awarded the Grand Prix for International Relations for his tireless efforts to protect and preserve Greece’s and Europe’s cultural and natural heritage for future generations. A true pioneer of environmentalism, advocating as early as the 1970s for sustainable development, Carras was one of the very first to talk about the concept of cultural landscapes. 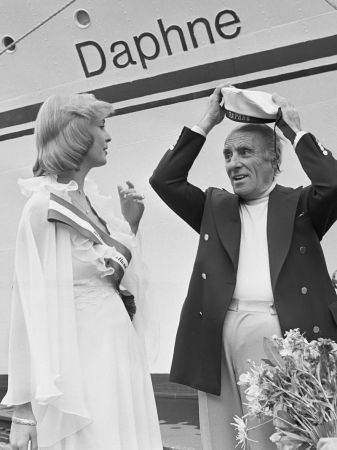 Born in London in 1938 to a shipowning family, the young Carras studied Classics, Ancient History and Philosophy at Oxford University, followed by Economics at Harvard. He embarked on a lengthy career in the shipping industry, and later served for nine years on the Board of the Union of Greek Shipowners.

Fuelled by his passion for Greece’s cultural and environmental riches, he co-founded ELLET with his wife Lydia in 1972, as a reaction to the damage caused by the Greek junta (1967-1974) to both the natural and architectural heritage of the country. ELLET soon went on to become Greece’s leading environmental organization, playing a seminal role in the drafting of Article 24 of the Greek Constitution of 1975, concerning the protection of the environment. Other important initiatives included the establishment of the National Marine Park of Alonissos, one of the largest marine protected areas in Europe, and conservation works at the ancient sanctuary of Delphi, a UNESCO World Heritage Site.

In their announcement of the posthumous award in June, the Europa Nostra jury stated: “Costa Carras has had a profound and lasting impact on the heritage field in Europe, as well as on the process of peace and reconciliation in the wider region of South-East Europe. His forceful leadership and activism inspired whole generations of heritage professionals and volunteers. Due to his strong determination combined with huge knowledge and wisdom he became a role model for many, and especially for younger people.”

The ceremony for the 2022 European Heritage Awards / Europa Nostra Awards, Europe’s top honor in the field, was held on Monday September 26 at the State Opera of Prague. The event assembled 600 heritage professionals, volunteers and supporters from across Europe.

Lydia Carras, the widow of Costa Carras, accepted the award on his behalf, while Athens Mayor Kostas Bakoyannis was also present at the ceremony.