Greek PM Mitsotakis: We shutter windows to provocations, but keep the door of dialogue open

Prime Minister Kyriakos Mitsotakis referred to the theme of the extraordinary summit on how to deal with the energy crisis.

Arriving at the site venue of the Prague Summit, Mr. Mitsotakis said the conditions are ripe for an intervention to reduce the cost of natural gas in Europe in order for states to help businesses and households. Greece’s proposal from the beginning was in favor of coordinated European action and he estimated that the decisions will be taken in a few weeks in Brussels.

“It is time for crucial decisions,” the prime minister said in response to a journalist’s question, while underscoring that there has been a delay in decision-making by the EU that is testing national budgets. It is time for Europe to strengthen its unity against Putin’s blackmail, Mr. Mitsotakis noted. 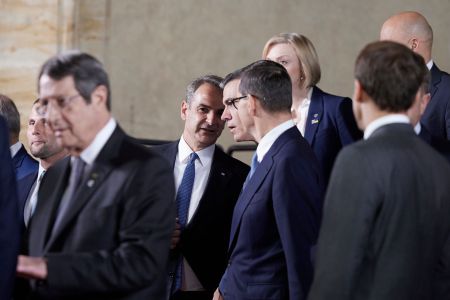 In relation to the Turkish provocations, the Greek Prime Minister sent a clear message to Ankara:

“Greece never provokes but responds confidently to provocations. I had the opportunity to repeat to the EU leaders yesterday what I said at the UN. It is not possible for Greece to be challenged by Turkey at this time. It was a first-class opportunity for EU leaders to see who is provoking and raising the bar. We shutters all windows to every provocations, while keeping the door of dialogue open,” he noted.

Regarding the shipwrecks in Lesvos and Kythira, Mr. Mitsotakis said that everyone saw that “Greek authorities rushed to rescue the people who set sail from Turkey without even life jackets f” while he called on Ankara to stop the exploitation of migrants. He denounced the traffickers’ rings and said that Turkey can crack down on these rings as it has done in the past.

“Greece will continue to do what it has been doing in recent years. To protect its borders and at the same time help those people in danger”.