Eleusis was chosen as a European Cultural City for 2023 because of its unique characteristics as a Greek city.

Eleusis or Elefsina is a town with a population of 30,000 and is situated 20 km from the city of Athens. The town is known for its ancient and modern industrial history. In ancient times it was considered to be, for almost 2000 years (e.g. 1600-400 AD), one of the five holy cities, where the Eleusinian Mysteries attracted pilgrims from all over the known world for years. Thanks to the great tragic poet Aeschylus, Eleusis gets even more famous in the ancient world and our days. 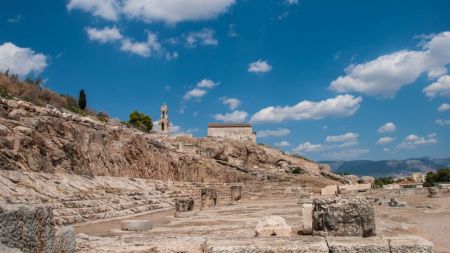 After 14 centuries of obscurity, in 1827, after the liberation from the Turkish occupation, Eleusis appeared as a small town of 250 inhabitants. In the 1860s, Eleusis began to change its urban profile by constructing new buildings and installing specific small crafting industries. During the 1880s, industrial development was started with the foundation of a soap factory (CHARILAOU -1875), the cement industry TITAN (1902), and distilleries BOTRYS (1906) and Kronos (1922).

During the 21st century, Eleusis is developed into a modern town that disposes of the distinctions of a glorious past. It constitutes the administrative centre of the wider area and is the headquarters of the Prefecture of Western Attica. The Archaeological Site and its Museum constitute international promotion and tourist attraction areas. Furthermore, the Festival “Aeschylia”, the cultural event organized by the Municipality each autumn, is nowadays an institution that allows the expression of modern cultural matters of the town.

Thus, alongside the economic development, the ongoing efforts for infrastructural improvement and protective environmental measures, efforts are made from the side of public authorities, private associations and individuals for rehabilitation of the spiritual character of the town to be worthy of the heritage that bears the name “Eleusis”.

Erdoğan’s message to the US: “Greece’s provocative actions is increasing tension”

Developments are also recorded in the area of Ioannina, where Energean is conducting surveys.

At 19:00 Kyriakos Mitsotakis will speak at a New Democracy event at the Cultural Conference Centre of Heraklion.

"With the new Rafale fighter jets and the upgrading of the F-16s, as well as the squadron of F-35s later on, the Greek skies are being shielded as never before," Mitsotakis said.

Russian Foreign Minister Sergei Lavrov's expressed dissatisfaction with the position Greece has maintained in the war in Ukraine.

Foreign Minister Nikos Dendias on Tuesday told reporters that his visit to South Africa was an opportunity to offer thanks to the country for its support of Greece's bid to become a non-permanent member of the UN Security Council and to also seek the vote of other sub-Saharan countries.

Bakoyannis presents Athens' vision for the B40 presidency

Athens Mayor Kostas Bakoyannis on Tuesday presented the vision of the Athenian presidency of the B40 Balkan Cities Network, wrapping up the proceedings of the B40 meeting held in the Greek capital on January 22-24.

Greece expects to extend the tourism season in 2023

Tatoi Palace to become museum by 2025

PM Mitsotakis: The bet for our second tenure is better jobs and better wages

The Greek FinMin welcomed the ESM's new head in his first visit to Athens since taking over his post, saying it was proof of the importance that the ESM chief gives to continuing and further enhancing the regular, efficient and mutually beneficial cooperation between Greece and the ESM.

The seismic surveys carried out in the areas west and southwest of Crete are expected to be completed by the end of February.

Κώστας Καλλιαντέρης 26.01.2023 | 02:00
Mitsotakis: “The new Kastelli airport will be an architectural jewel, a beacon of development”