On Tuesday, Mitsotakis will participate in the proceedings of the EU-Western Balkans summit in Tirana, as it is the first time that such a summit is hosted in a country candidate for joining the European Union. After the end of the summit, Mitsotakis will have bilateral meetings with the Albanian leadership and more specifically with his counterpart, Edi Rama, the President of the Republic, Bajram Begaj and the President of the Parliament, Lindita Nikolla. Before the bilateral meetings with the Albanian leadership, the prime minister will have a meeting with the Archbishop of Tirana, Durres and all Albania, Anastasios. 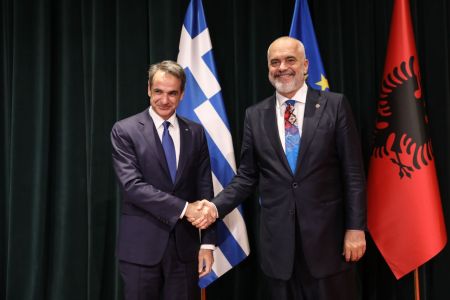 He was also expected to visit Northern Epirus, specifically Himarra, Livadia (Finiki) and Dervitsani (Dropoli). However, due to weather conditions, the prime minister’s helicopter flight is not possible.

According to government sources, the planned visit of Kyriakos Mitsotakis to Himarra, Livadia and Dervitsani has been postponed and will take place at a later date.

It is also noted that the last visit of a Greek prime minister to areas inhabited by the Greek ethnic minority was that of the current PM’s father Konstantinos Mitsotakis, in January 1991, in Dervitsani