Pagenews.gr / English Edition / 6 Greek destinations among the top 10 of Europe

According to research by World Travel Market

In an interview with ANT1 channel, Minister of Tourism Vassilis Kikilias referred to the very positive data from international and European organizations demonstrating the continued upgrading and strength of the “Greece” brand.

As Mr. Kikilias said, according to a World Travel Market survey, among the top ten European tourist destinations recording the largest increases compared to 2019, 6 are in Greece, with Mykonos and Rhodes recording an increase by 29%, Chania 26%, Heraklion 23%, Santorini 20% and Thessaloniki-Halkidiki 19%, while Athens is also very high in urban tourism (3rd place). 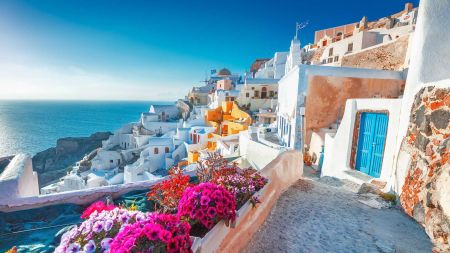 In addition, for the US market Greece shows the largest increase (+22%) of all foreign destinations for the Independence Day holiday

Equally important, however, is that destinations in Greece that do not have a strong brand, recorded an upsurge this year recording high occupancy rates and bookings until year’s end. Mr; Kikilias noted that places such as Kastoria, and Epirus – which was the poorest Region in Europe a few years ago – became a destination, with Ioannina, Metsovo, Aristi, Papigo having travelers in winter, weekends and summer. Aegina has 92% occupancy and the tourist season in the Peloponnese, will likely extend to November. The Minister of Tourism reiterated his belief that the tourist season will not end until the year is over.

Finally, the Minister of Tourism stated that the people of Turkey are not influenced by the rhetoric of their country’s leadership and this is proven by the number of travelers visiting the Greek islands. As he said, many islands in the eastern Aegean such as Lesbos, Chios, Kos, Symi, Halki and Rhodes are full of travelers from Turkey, especially after the opening of daily ferry routes connecting the southeastern Aegean with the Asia Minor coasts.

Sarah Jessica Parker: Vacationing secretly in Syros – What got her excited?

Included as a location for possible investment projects is the small, sparsely populated island of Thirasia, opposite the main port of Santorini.

28 lighthouses to open for the public on August 21

International Lighthouse Day is celebrated annually on the third Sunday in the month of August.

Highspeed Aero I, II, and II will connect Piraeus with the islands of Egina, Angistri, Poros, Hydra and Spetses

This is how we start our mornings in Greece…

According to Space.com Hanks made the amusing revelation about the Bezos invitation during an interview during an appearance on “Jimmy Kimmel Live!”

Giannis Antetokounmpo: “The first goal is to become a team. Let’s meet each other because everyone is a leader in their own team. I am a leader in Milwaukee, Sloukas is a no. 1 in Olympiakos, and so is Agravanis in Prometheus. But we must become the best together,”