The Spanish-language edition of the National Geographic magazine has a tribute to three Greek islands.

Astypalaia, Naxos and Ios are on the green list of Greek destinations of the Spanish-language National Geographic entitled “the islands that want to be free”. According to the magazine, Astypalea, Naxos and Ios are three examples of islands that, despite their incomparable beauty, have successfully resisted the “sirens’ song” of mass tourism. 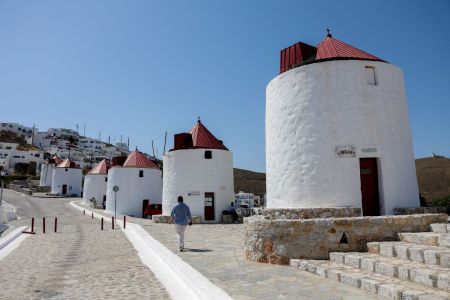 The reference to Astypalea

Regarding Astypalea, the magazine reports that the 1,300 inhabitants of the small beautiful island together with the Municipality prove that a “green” way of life is possible. Electric vehicles are replacing traditional public transport and private vehicles, the network of charging stations is expanding and an e-car sharing service is already operating.

According to the article, the Municipality of Naxos & Small Cyclades has made clear its intention to change course towards alternative forms of tourism, such as hiking and cycling. Ariadne’s island is blessed with an impressive coastline, fertile and bright valleys, historical monuments and a “mythical” mountain, Mount Zas. Finally, the magazine praises the efforts of the Municipality of Ieton in saving the most valuable commodity on Greek islands, water. Recently the enchanting island received an award for the “intelligent” management of water resources, while a large program of planting new trees and flowering plants was completed.

“In Ios, we are planning the next day based on concerns about the environment, culture and special forms of tourism, so that together with the beaches, entertainment and gastronomy, we will be a model destination offering many charming contrasts”, stated Gikas Gikas, the mayor of Ios, .

“Astypalea is constantly evolving into a combined travel experience of sustainability and authenticity that has given a new identity and impetus to the Aegean butterfly”, the mayor of Astypalaia, Nikos Komineas pointed out.

“Our narrative about Naxos, as the only island in the Cyclades with such a wide variety of alternative activities, is impressive, with the tourist flows continuing even after August”, explained the deputy mayor of Tourism of Naxos and Small Cyclades, Vangelis Katsaras.

Sarah Jessica Parker: Vacationing secretly in Syros – What got her excited?

Included as a location for possible investment projects is the small, sparsely populated island of Thirasia, opposite the main port of Santorini.

28 lighthouses to open for the public on August 21

International Lighthouse Day is celebrated annually on the third Sunday in the month of August.

Highspeed Aero I, II, and II will connect Piraeus with the islands of Egina, Angistri, Poros, Hydra and Spetses

This is how we start our mornings in Greece…

According to Space.com Hanks made the amusing revelation about the Bezos invitation during an interview during an appearance on “Jimmy Kimmel Live!”

Giannis Antetokounmpo: “The first goal is to become a team. Let’s meet each other because everyone is a leader in their own team. I am a leader in Milwaukee, Sloukas is a no. 1 in Olympiakos, and so is Agravanis in Prometheus. But we must become the best together,”