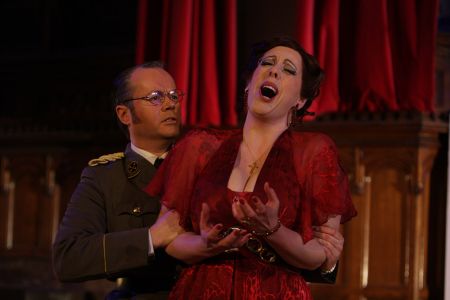 Playing on July 28-31 at the capital’s Herod Atticus Theater, the production is conducted by Phillippe Auguin and stars Kristine Opolais alternating with Cellia Costea as Floria Tosca, Ramon Vargas and Giorgio Berrugi as Mario Cavaradossi, and Dimitri Platanias and Tassis Christoyannis as Scarpia.

Cesare Angelotti, an escaped political prisoner, rushes into the Church of Sant’Andrea della Valle. After finding the key his sister has hidden for him, he hides in his family’s private chapel. Soon, the painter Mario Cavaradossi arrives to work on his portrait of Mary Magdalene. The painting has been inspired by Angelotti’s sister, the Marchesa Attavanti, whom Cavaradossi had seen praying in the church. Angelotti, who was a member of the former Bonapartiste government, emerges from his hiding place. Cavaradossi recognizes him and promises help, then hurries him back into the chapel as the singer Floria Tosca, his lover, calls from outside. When he lets her into the church, she jealously asks Cavaradossi to whom he has been talking and reminds him of their rendezvous that evening. Suddenly recognizing the Marchesa Attavanti in the painting, she accuses him of being unfaithful, but he assures her of his love. When Tosca has left, Angelotti again comes out of hiding. A cannon signals that the police have discovered the escape, and he and Cavaradossi flee to the painter’s home. The sacristan enters with choirboys who are preparing to sing in a Te Deum celebrating the recent victory against Napoleon at the Battle of Marengo. At the height of their excitement, Baron Scarpia, chief of the secret police, arrives, searching for Angelotti. When Tosca comes back looking for Cavaradossi, Scarpia shows her a fan with the Attavanti crest that he has just found. Seemingly confirming her suspicions about her lover’s infidelity, Tosca is devastated. She vows vengeance and leaves as the church fills with worshippers. Scarpia sends his men to follow her to Cavaradossi, with whom he thinks Angelotti is hiding. While the congregation intones the Te Deum, Scarpia declares that he will bend Tosca to his will.