More than 100 Greek companies meet for deals with Saudi Arabia

Some 243 business-to-business meetings were held between companies of both Greece and Saudi Arabia, leading to the signing of significant agreements on the occasion of an official delegation from Saudi Arabia headed by Crown Prince Mohammed bin Salman bin Abdulaziz Al Saud.

The minister added that the number of agreements signed at the Greek-Saudi Business Meeting on Wednesday – during the first official visit to Greece of Crown Prince of Saudi Arabia Mohammed bin Salman bin Abdulaziz Al Saud – “is undoubtedly a success and encouraging in that we are moving in the right direction.” 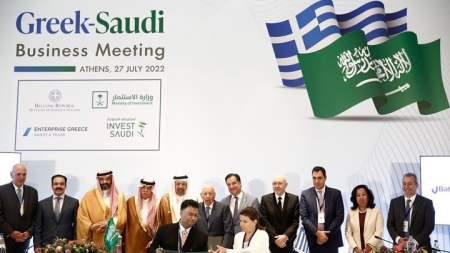 Fragogiannis was addressing the high-level meeting with members of the Saudi ministerial and business team, which followed the two recent business forums held between the two countries in 2022 (Riyadh, March 13-14 and Athens, May 30-31).

Among the agreements signed was one for the construction of a submerged cable system to transfer data, worth nearly 1 billion euros (3.75 billion SAR), called East to Med Data Corridor (the EMC project), and one for energy that covers conventional and renewal energy sources worth 2.6 billion euros.

Attending the signing event were Greek and Saudi ministers and executives from companies in both countries.