Mykonos has had its best year ever, tourist arrivals are up by at least 20%

Celebrity favourite Mykonos island has made mint being the playground for the rich and famous but locals are starting to feel that development has gone too far writes Helena Smith for The Guardian.

“Our island is full, it has exceeded its limits,” says Marigoula Apostolou, president of the local folklore museum. “Our natural environment has been destroyed, our water and sewage infrastructure cannot cope, and that is before we even talk about the threat to our lifestyle by being branded a party isle.” 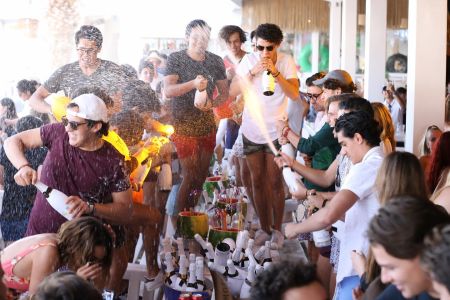 Another local, Irene Syrianou, who is trying to promote Mykonos’s culture through mosaics inspired by the magnificent examples found among the ruins in Delos, echoes a similar sentiment. “A lot of us have forgotten that we are the children of people who were poor,” she says, adding that noise pollution from bars had got so bad that locals had taken to petitioning the mayor. “Living here is That’s because Nikos Zouganelis, “born and bred” on the party island, has deliberately sought to do something new. “At Rizes we want to live the Mykonos of our roots,” he says of the venture, whose delights instead include cooking classes, breadmaking and horse riding. “We don’t do champagne, we don’t do music, we don’t do crowds.”

‘In his office, mayor Koukas has a panoramic view of the hilltop opposite, one that was virtually bereft of buildings when he was a child but today is a mass of villas, many equipped with chefs, concierges and masseuses primed to attend to the whims of footballers and other A-listers. ‘He too shares the concern that Mykonos could be lurching towards saturation point after Greece’s pro-business government announced it would be pressing ahead with controversial plans to construct gargantuan hotel units in the name of “strategic investment”. One project backed by investors in Abu Dhabi and Kuwait envisages the construction of a small village with a port capable of mooring superyachts.’ “Mykonos has had its best year ever, tourist arrivals are up by at least 20%, but sustainable development is our biggest problem,” Koukas admits. “We want to decide our own future as a local community … yes, we are a party island but Delos is right next door. Elon Musk visited it and we are very glad because we’d also like to be known as a centre of culture tourism. The last thing we want is to lose our cultural identity.”