Bette Midler was blown away by the Cretan cuisine.

The famous American comedian and singer Bette Midler was in Crete last Wednesday, enjoying a few moments of relaxation.

Shortly after, she enjoyed lunch with her husband and two of his associates at a well-known restaurant in the city, causing a frenzy among passing tourists who recognised her.

According to Nea Kriti, their meal included fresh fish and seafood, while the wine was Spina Muscat from a Cretan vineyard. 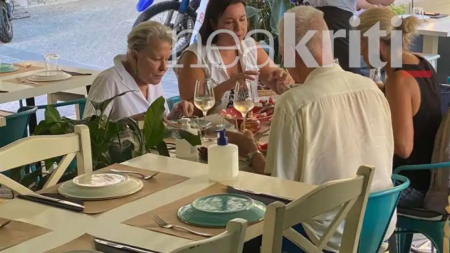 Bette Midler was blown away by the Cretan cuisine. While finishing her meal, she enjoyed a Constantinople halva with ice cream and mastic liqueur for dessert.

It is noted that the actress refused to take pictures with the tourists who recognised her and loudly expressed their feelings of admiration, wanting to keep her presence in Heraklion as “quiet” as possible.