Drisbioti in running for European Athlete of the Year title

Pagenews.gr / English Edition / Drisbioti in running for European Athlete of the Year title

The men’s and women’s European Athletes of the Year and Rising Stars will be announced at the Golden Tracks award ceremony, which takes place in the Estonian capital of Tallinn, on October 22.

Antigoni Drisbioti, who won two gold medals in the 2022 European Championships recently, is among the ten nominees for the title of women’s European Athlete of the Year awarded by the European Athletic Association.

The men’s and women’s European Athletes of the Year and Rising Stars will be announced at the Golden Tracks award ceremony, which takes place in the Estonian capital of Tallinn, on October 22. 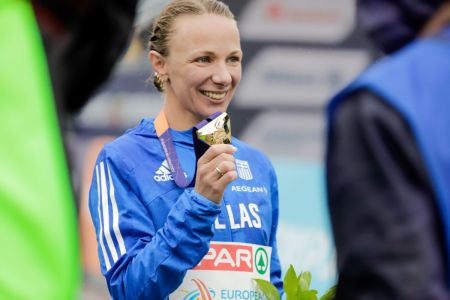 The public can also have a say in picking a winner by selecting an athlete on European Athletic’s social medial accounts.

The social media vote accounts for one-quarter of the overall vote, with the member federations vote, media vote and expert panel vote each accounting for the other three quarters.

Voting closes across all channels on September 30 and a shortlist of three athletes will be announced in each category in the week starting October 3.