Travel companies that partner with Uber around the world are looking for unusual travel destinations that, according to data, are of interest to travelers.

The Uber app is optimistic about a significant increase in tourist traffic in Greece in July-August 2022.

The application notes that the non-traditional destinations offered by Greece to its guests from different countries are in great demand.

Travel companies that partner with Uber around the world are looking for unusual travel destinations that, according to data, are of interest to travelers.

Most app users visiting Greece open it and enter the country with it. This year’s data, compared to the pre-pandemic period, is really impressive. Judge for yourself by reading the Uber report for July and August. 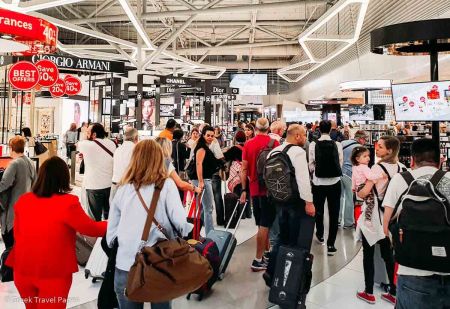 The number of foreign app users who use it to get to and from the airport increased by 189%.

This year compared to August 2019:

The number of overseas users who used the app to travel to and from the airport increased by 153%.

The three best visited places in Greece were Laimos Vouliagmeni, Kavouri and Varkiza, which were in high demand for because of the beaches.

The longest completed route was 613 kilometers – it included a trip from Thessaloniki to Halkidiki, Parga and back to Thessaloniki.

A significant increase in demand for non-traditional routes is noted by Uber, which has compiled a corresponding list of the most popular destinations.

It was headed by the “Arch of Galerius” (“Αψίδα του Γαλερίου”) in Thessaloniki, followed by the “Cemetery of Trains” near Thessaloniki, the “Theatre of Epidaurus” in Old Epidaurus, the “Museum of Olives and Greek Oil” in Sparta, the “Botanical Garden of Julia and Alexandru N. Diomedes” (“Βοτανικός Κήπος Ιουλίας και Αλεξάνδρου Ν. Διομήδους”) in Haidari, News Beast reported.