Finance Minister Christos Staikouras said he was “realistically optimistic” that Greece can – and will – move to high, sustainable and socially just growth and prosperity for all the society, despite the fact that crises are tending to become the new normal, while addressing the Economist conference on Monday.

According to the minister, this is based on the performance of the economy, which “builds” confidence, provides protection, cultivates reasonable expectations and creates positive perspectives against the shocks of unpredictable external developments. He referred to the updated figures, according to which Greece’s GDP will rise to 210 billion euros this year and 220 billion euros in 2023, an increase of 5.3% this year and a little over 2% next year, while noting that this growth will be combined with policies that ensure fiscal stability. 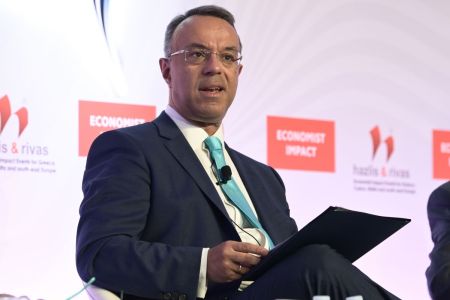 In particular: Foreign direct investments reached 5 billion euros in 2021, recording the highest performance of the last twenty years. This upward trend is continuing in 2022, since in the first half of 2022, FDIs have exceeded 90% of those throughout the previous year.

Exports accounted for 41% of GDP in 2021, double the pre-crisis levels. Today, Greece exports more than France, Italy and Spain, while it has impressively increased exports of high-tech goods.

3. Unemployment is shrinking. Having fallen by around 6 points, compared to 2019, it is at its lowest level in the last 12 years, with a more significant reduction in the level of youth and female unemployment.

5. Greece credibility has also been strengthened. The country has exited the regime of enhanced surveillance, has prepaid all IMF loans, has been upgraded 11 times over the last three years (four of them after the outbreak of war in Ukraine), returned to European normality and is approaching investment grade.

EU member-states are “close to reaching an agreement over a new Migration and Asylum Pact,” Schinas said, expressing the belief it will be ready before the current European Commission’s term ends in 2024.

Mitsotakis chatted with children about their school life, the FIFA World Cup 2022, and soccer.