“Should the Elgin Marbles be returned to Greece?” to which 78% of the 11,315 survey participants responded with a resounding YES, with only 22% of pollsters opposing their return. The survey results are yet another positive development in Greece’s perennial request for the reunification of the Phidias sculptures, gaining unprecedented momentum in recent months.

Even the Times newspaper, a traditional opponent for the return of the Parthenon Sculptures, has softened its stance to the point of even issuing a survey which it must have known would favour the Greek request. 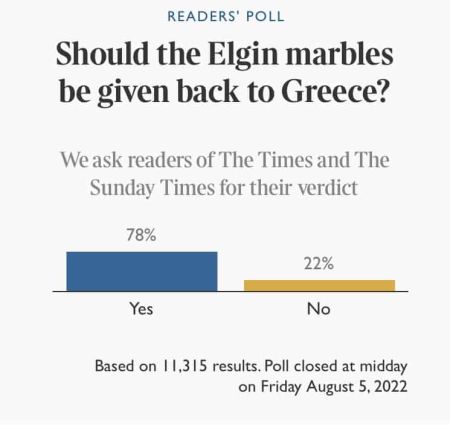 “For more than 50 years, artists and politicians have argued that these artefacts so fundamental to a nation’s cultural identity should be returned to Greece. The museum and the British government, with the support of The Times newspaper, resisted this pressure. but times and circumstances have changed. The sculptures belong to Athens. And they must now be returned,” she wrote in her main article on January 12, 2022.

And a YouGov poll in the United Kingdom last November showed that 59% of respondents believe that the Sculptures belong to Greece, while only 18% answered that they belong to Britain. The remaining 22% said they had no opinion.