“This year tourism showed that it is indeed the “heavy industry” of Greece and can not only strengthen the national economy but also provide it with significant support in very difficult conditions,” Minister of Tourism Vassilis Kikilias noted, among other things, in an interview with state Athenian-Macedonian News Agency , adding that no one can dispute the excellent course that tourism in Greece has been following to this point.

In support of this, he pointed out that as every week passes Greece will welcome 1 million visitors. It is characteristic that in July arrivals exceeded 900,000 every week, according to what the minister reported to APE-MPE. 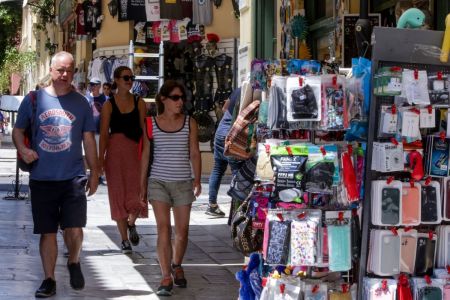 Continuing with the unprecedented performance of Greek destinations this year, Vassilis Kikilias focuses on the South Aegean Region, reporting that in July the region in question recorded a leap in arrivals of +20% compared to the corresponding month of 2019, with 17,500 internationals flights and more than 3 million travelers.

Against the background of the war in Ukraine and the losses that Greece had this year from Russia and Ukraine, the minister underlined that this year, after the huge crisis caused by the pandemic in tourism in previous years, the markets of the United Kingdom, Germany, Scandinavia and other countries have made a strong comeback.

At this point, the minister made special reference to arrivals from the USA, stressing that in June they had increased by 50% compared to 2019, while a 32% increase was recorded from Austria and 24% from Israel. “Greece this year is the number 1 destination for travelers from France, Israel, very high in the preferences of tourists from the Balkans, and in the top 3 positions in Germany and Scandinavia,” noted Mr. Kikilias.

One of the big bets of Greek tourism remains the lengthening of the tourist season. Asked about this issue, Mr. Kikilias stated the following: “there are, not just indications, but proof that the tourist season has already been lengthened and, yes, there are also indications that it will expand further.” In the interview he gave to the agency, Tourism Minister Vassilis Kikilias focused among other things, on the future of Greek tourism and the goals set by the ministry’s political leadership.