Kyriakos Mitsotakis: time to fight for our European identity and stability in “This is Europe debate”

Pagenews.gr / English Edition / Kyriakos Mitsotakis: time to fight for our European identity and stability in “This is Europe debate”

Kyriakos Mitsotakis: time to fight for our European identity and stability

On Tuesday, the Greek Prime Minister focused on the need to broaden and deepen the EU while addressing MEPs during the fifth “#ThisisEurope” debate:

At the beginning of his speech, Prime Minister Mitsotakis stated that his country suffered more than any other in the past few years, but was ultimately able to overcome the political and economic challenges that almost led to its exit from the euro. Now, in addition to being among the top growing economies in Europe, Greece is on the front line of fighting for the future of the EU – in the EU’s response to the pandemic, as well as in protecting the external border from Turkey’s instrumentalisation of migrants and its aggression against Greece and Cyprus. 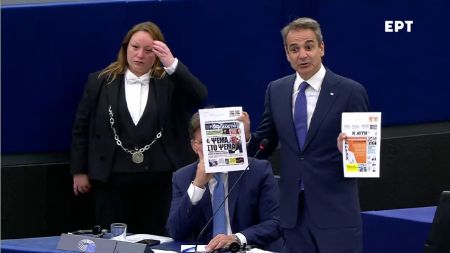 Asking for more solidarity on these fronts, he also called for EU enlargement in the Western Balkans, in parallel to a push for more integration, especially in energy and defence. He underlined the role that Greece is ready to play in enhancing the EU’s energy autonomy and green transition, through an array of infrastructure and cooperation initiatives in the East Mediterranean. Referring to Russia’s war against Ukraine, he stressed that there is only one side to take – that of democracy, justice, peace, and international law. This means supporting Ukraine and preventing any kind of fait accompli that would create a dangerous precedent for other revisionist forces.

Mr Mitsotakis confirmed that he is in favour of coordinated action to rein in skyrocketing energy costs, which would also protect the European Union by limiting the space for populist narratives. The EU needs to protect the freedom and prosperity that previous generations fought for, while continuing to build a European identity and fighting for lasting stability, he concluded.

Over a million tourists expected to arrive in Greece every week

Citing the latest official figures, he added that the numbers of German and British tourists in July are higher than in 2019 in several destinations

Boris Johnson shopping in a supermarket in Nea Makri, Greece

The British Prime Minister, wearing a shirt and jacket without a tie, did his shopping himself at the local supermarket chain

Cycling 3000 km for the Reunification of the Parthenon Sculptures

The 3,000 km ride will commence at the British Museum and end at the Sacred Rock of the Acropolis; the first such event organised by Greek cycling enthusiasts.

Virtual reconstruction of the Curetes street in Ephesus, Ancient Greece

This street took its name from the priests who were called as Curetes later.

The church of Panagia Megalochari is located on a hill above Chora, the capital of Tinos

Opened in 2019, the Rafa Nadal Tennis Centre on the Halkidiki peninsula aims to provide players with the same world-class training methods that helped the Grand Slam champion rise to the top of his sport, and is also one of Greece’s premier tourist locations.

Gct gives you small Greek islands, ideal for holidays without a car.